Have you taken a single bus route that lasted 30 hours?

The dusty road through Patagonia

My first encounter with Argentina is through a book, Bruce Chatwin's In Patagonia. Its curious tales are the primary inspiration for my visit to Argentina, especially to Patagonia.

I find most of the route to be mundane. For one, I can't read on account of motion sickness, so there's a lot of staring out through the windows with a few naps interspersed. The landscapes oft repeat. Here are some hills, now some desert.

To keep my mind occupied, I plan the last legs of my Argentina trip in my head. There are many iterations I chart. On these days I'll hike, this day I'll visit the glaciers. I try answering other questions in my head. How am I doing on budget? Based on the location of the sun now, what time could it be? What songs should I spend the remaining 3 hours of battery life on my MP3 player on?

The last question is the easiest to answer. I put one song from a game I had been playing before I left for Argentina. In my mind it captures this journey into the vast Patagonian plains best.

Counting the minutes and hours

I've been most impressed by Argentina's buses. Their seats are really comfortable. Some of the semi-cama and cama seats have chairs resembling the ones you'd find in business class of an airliner. The one I took to Iguazu, for example, had a lie flat configuration.

Not the ones on this route though.*

This is an average coach bus that you might take in the States, an aging Greyhound built in the 70s. The upholstery's worn and the nub that controls the overhead air is loose. The seats aren't really designed for a journey as long as ours either. They're actually pretty comfortable for sitting in, but don't recline enough for good sleep.

*It looks like there are now other buses with better seats that departs in the morning from Bariloche, although this bus takes a different route from the one I take. 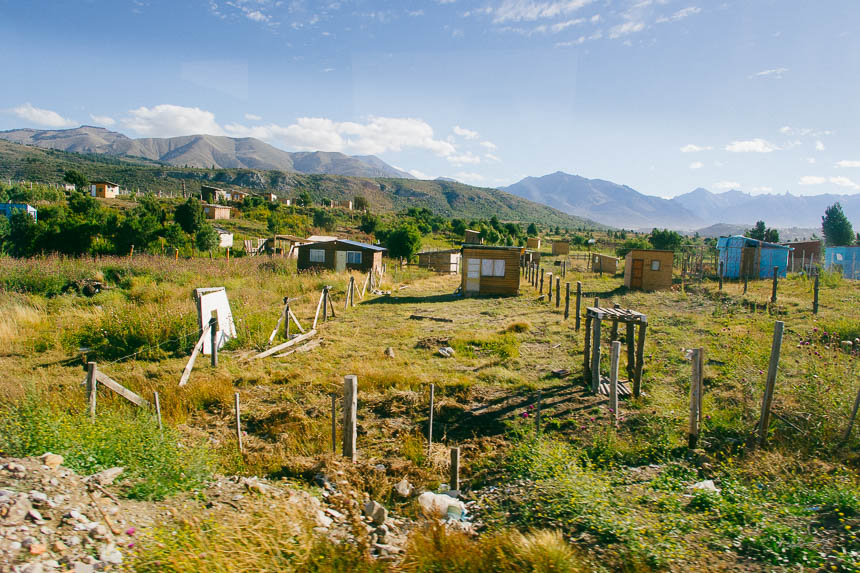 We stop in Esquel for a quick dinner break. A cardboard box holds trays, one for each customer riding the Marga, containing a thin slice of fish and a salad made of partially dried out leaves of lettuce. It's not appetizing. 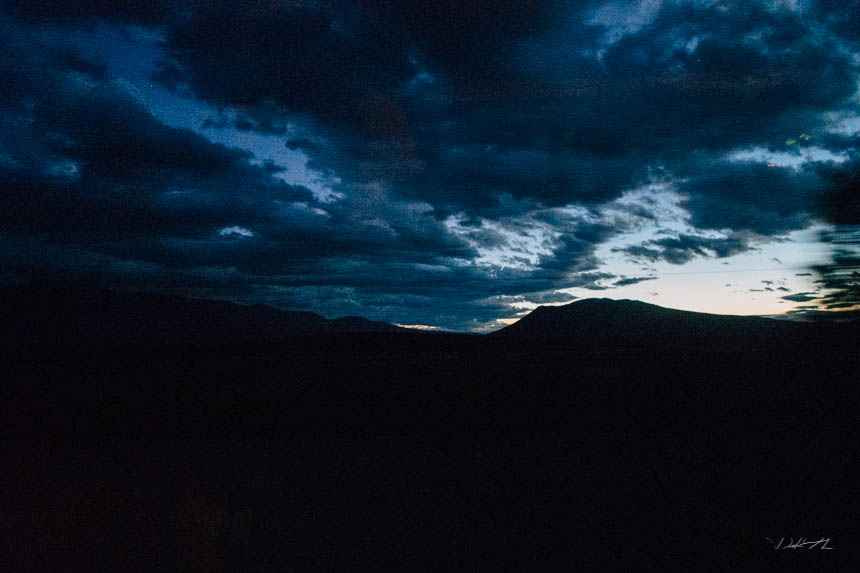 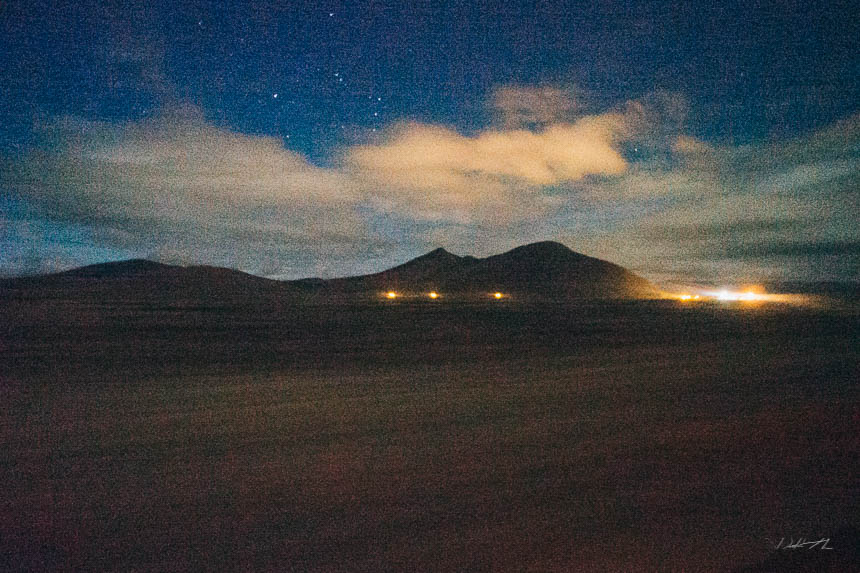 Past midnight we make a stop at a bus terminal. I'm not sure which one it is. The baggage handler, a middle-aged man with a slight stutter, is in the happiest of moods to see our drivers. He chatters away with them while absentmindedly loading the new passengers' bags. When I board again I'm happy to find that the seat beside me is empty.

We roll off again. Ever chipper, the bag handler sends us off with an animated bras d'honneur, middle finger high in the air, followed by a few other inappropriate gestures I shan't describe here. I chuckle at this unexpected display of crude humor. 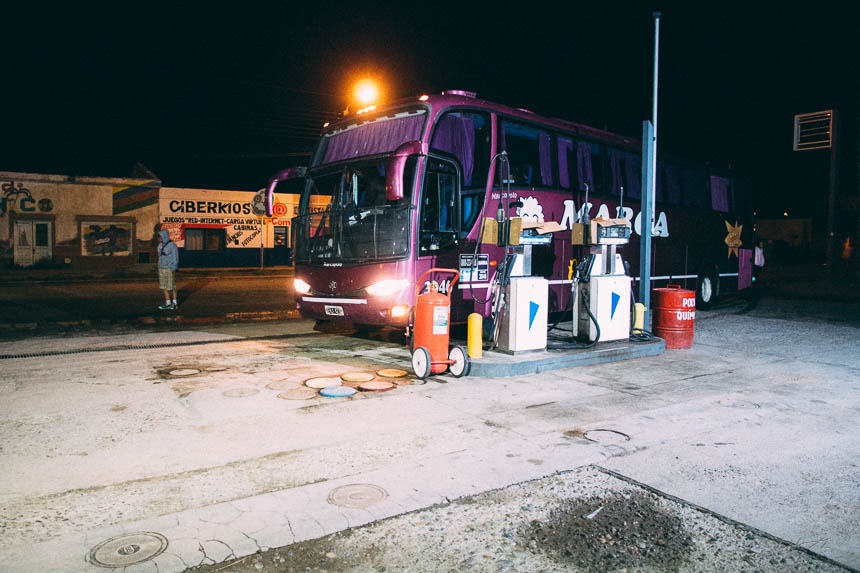 Early next morning our bus pulls into Terminal Perito Moreno. There are a couple of restrooms here, a convenience store that hasn't opened yet, and an empty waiting area.

We're the only visitors at this hour. 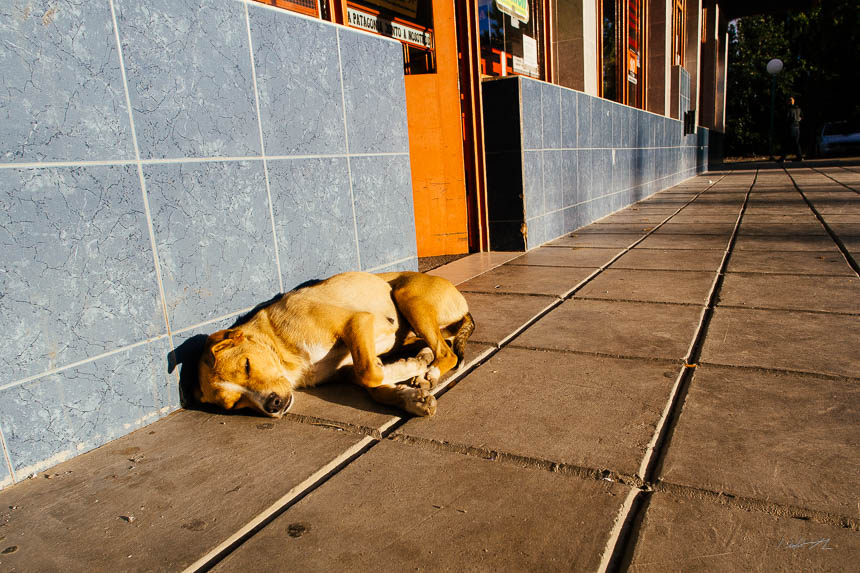 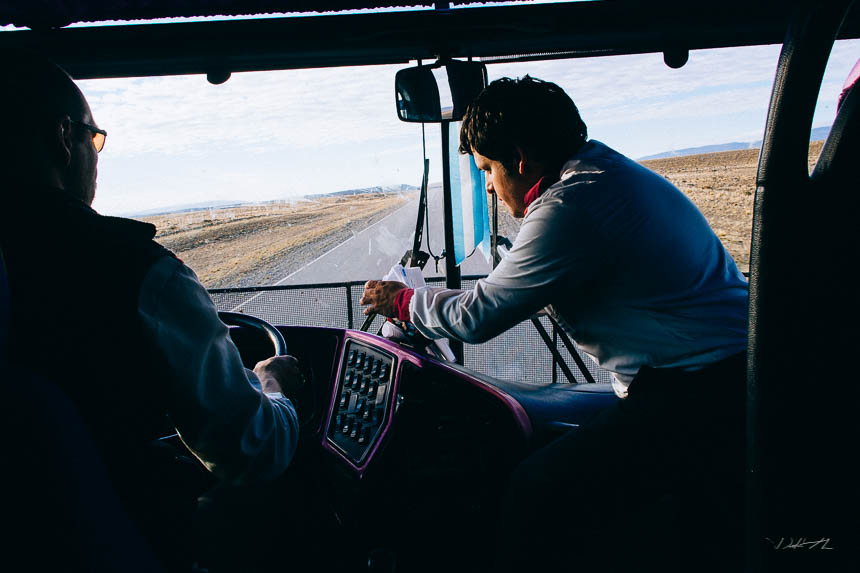 For breakfast, our driver passes out plastic bags containing individually packaged crackers and cookies and a dinky Styrofoam cup. There's a hot coffee dispenser at the back of the bus, but it's impossible to fill a cup more than halfway and not spill any of it as our bus bounces over the potholes.

In 2012, RN 40 is still largely a two-lane dirt road, although that's soon changing. The government's plan is to pave the entire length of this road. 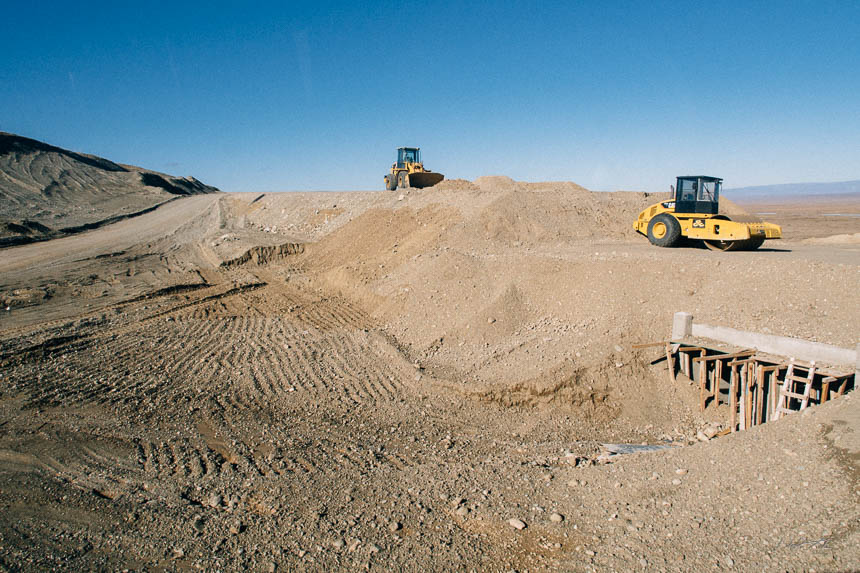 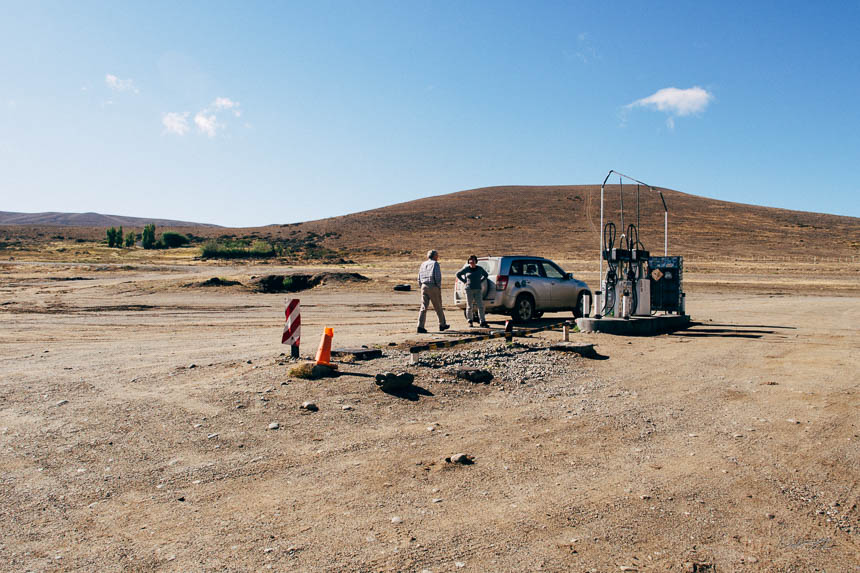 18h48m - Petrol station. The Marga is behind me at the diesel pump.

Other travelers in Bariloche tell me that it's not uncommon for the bus to breakdown once, maybe twice in the journey. Ours breaks down three times prompting our drivers to change into their jumpsuits and get to their repairs. 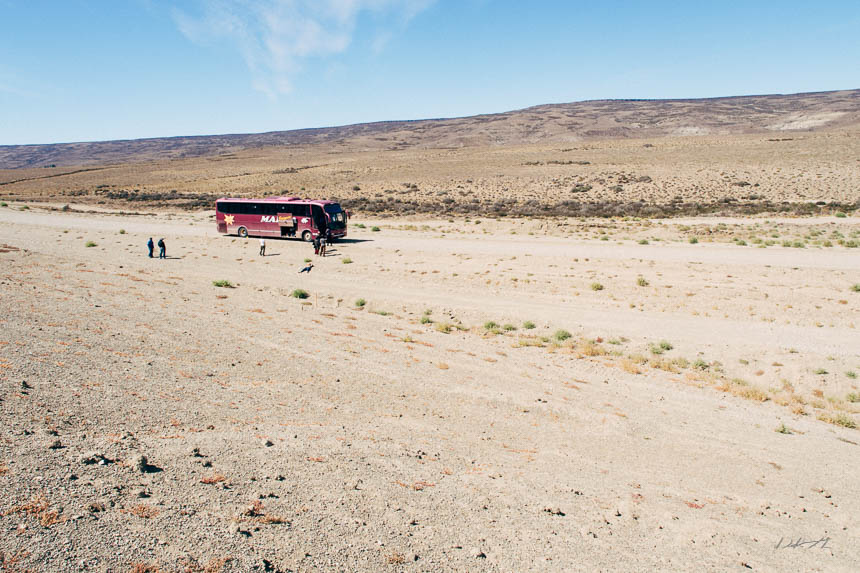 We have our third and last breakdown about three hours away from El Chalten. This malfunction sets us back 45 minutes, but it's well timed for a remarkable sunset. 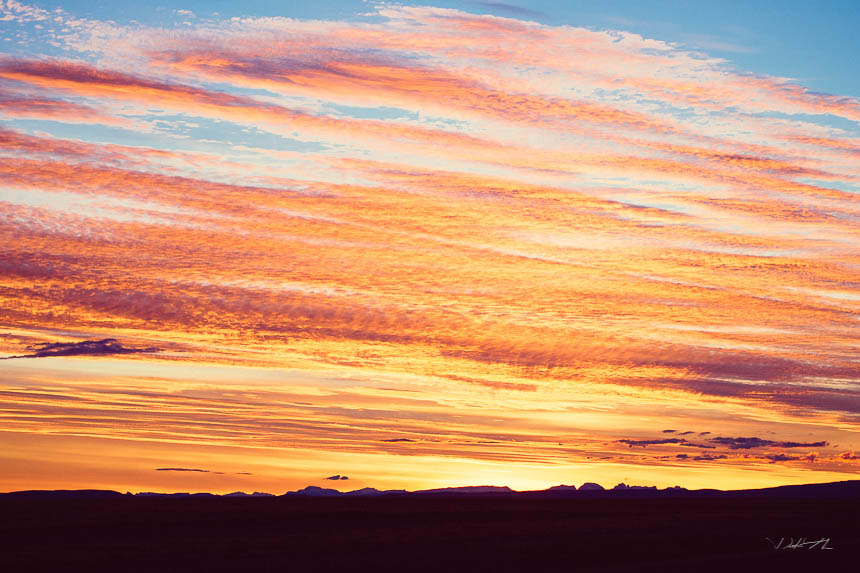 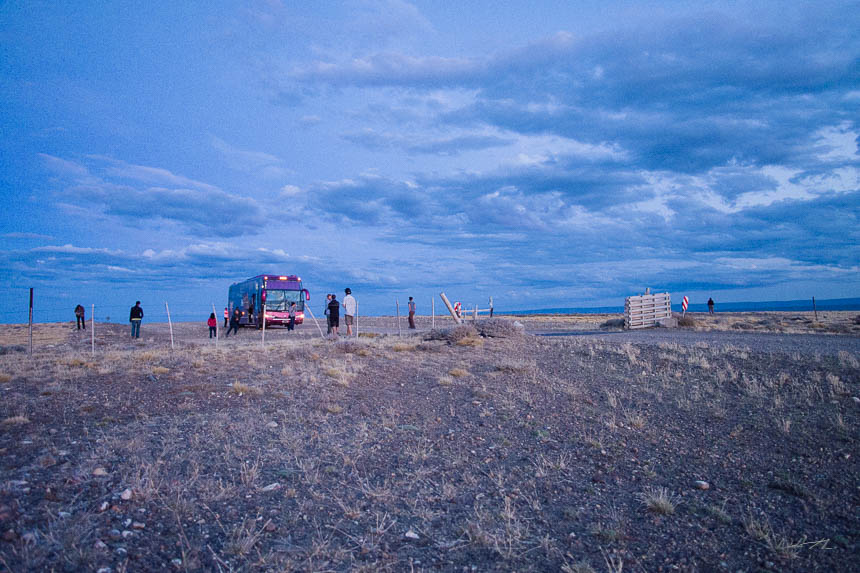 27h05m - The majestic Marga, down but not defeated.

The last thirty minutes are the most exciting. It's like when you're on a plane and you look down below and recognize bits and pieces of your destination, the final approach.

The Marga's running at a good pace turning with the bend of the road. In the distance I spot Mt. Fitz Roy, which looks as it does in all of the pictures I've seen of it. It gleams splendidly under the moonlight. At this point we're only minutes away from our last stop.

More (much more) of this mountain to come in the next post. 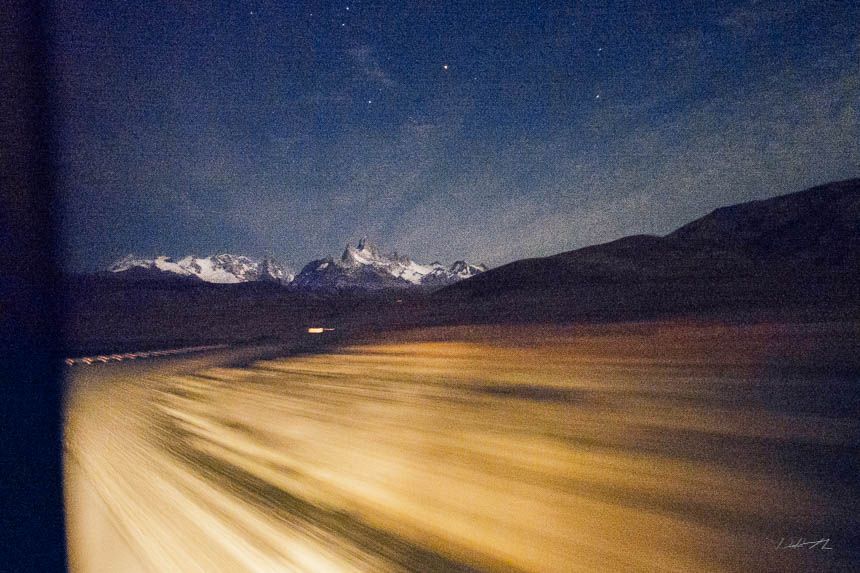 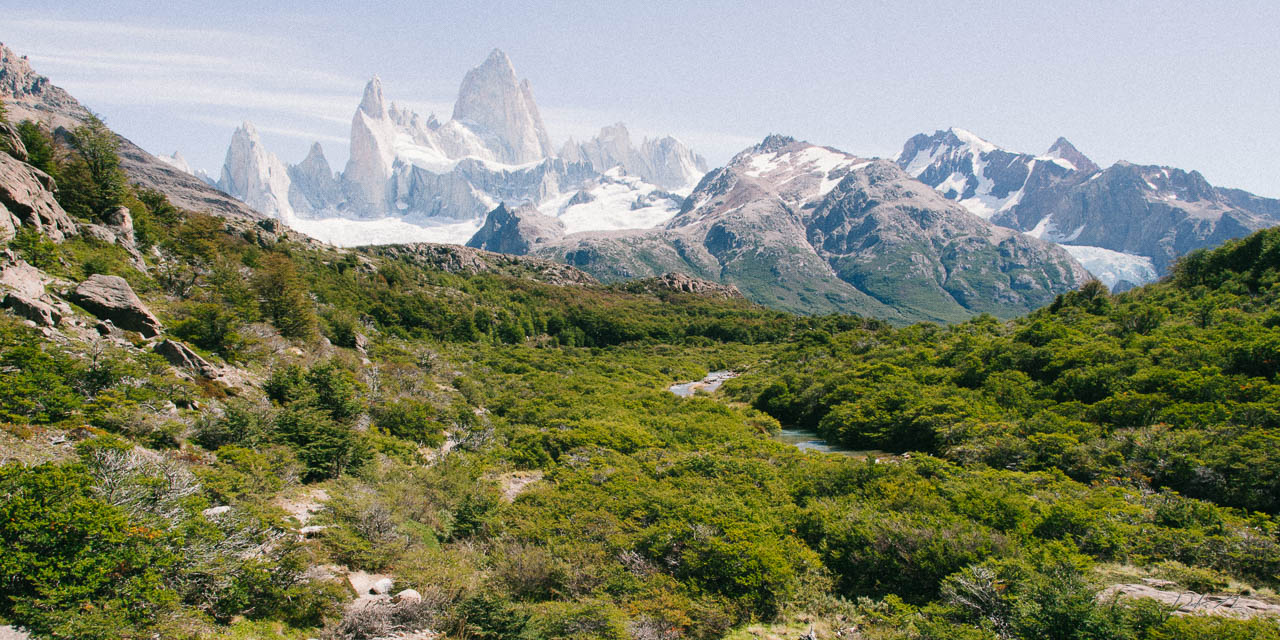