The Cloud Forest of Monteverde is as magical as it sounds.

Along the continental divide

My trip starts by hitching a ride in the back of a pickup.

Its engine handles the mountain passes like a champ. Gravel grinds and growls underneath, sounding the occasional "ping!" each time a pebble tags the underside. Above, there's a ton of rattling, presumably from the scores of hidden screwed that have loosened over the decades.

The tire I sit on absorbs the bumps that my feet feel very well. Already it's not quite as taut as it was from when we first yanked it off and replaced it with our spare. It took about an hour to recover from that flat.

When we're halfway along Route 606, the friendly strangers who offered me the ride pull into the lot of a convenience store, grabbing snacks and a smoke. The driver insists on treating me to a Coke. I oblige.

I can't say riding in this pickup is the safest or most comfortable way up to the Cloud Forest, but certainly it beats the bus. This much I can confirm when I leave Monteverde a few days later on one. Something about the climate controlled cabin and the shock absorbent seat cushions just doesn't do these wild mountain passes justice. 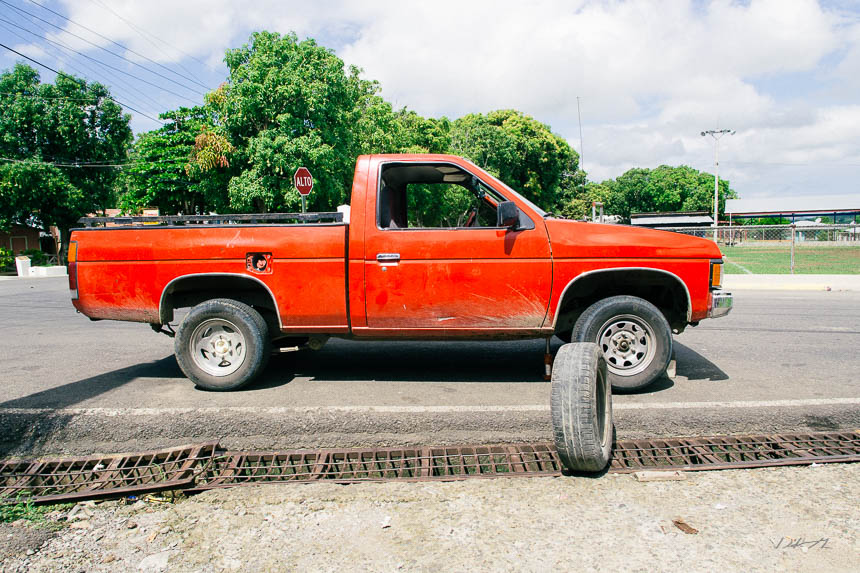 That's my seat propped over the gutter. 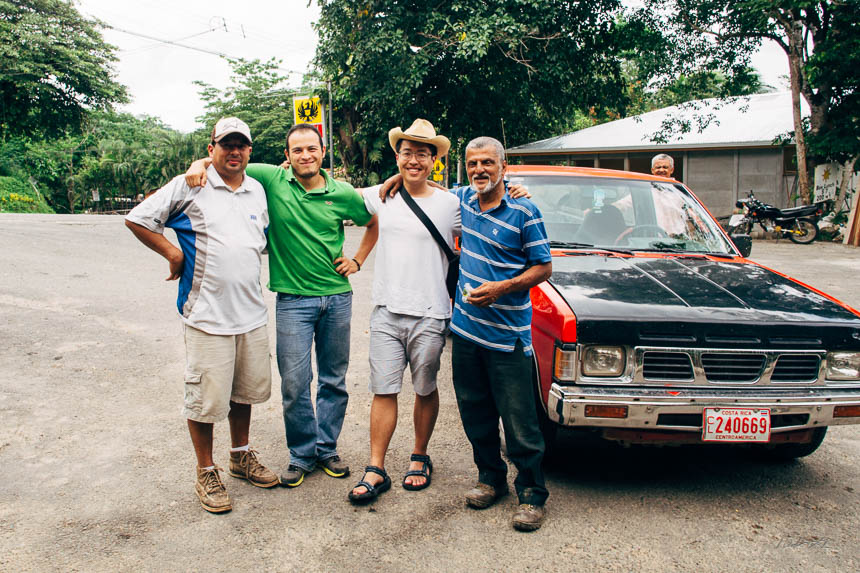 A picture I had with my new friends. 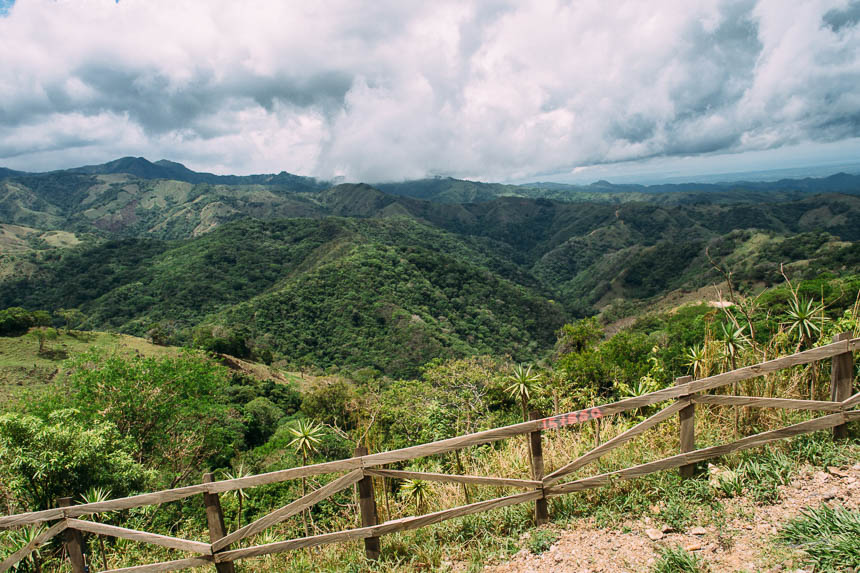 The mountains surrounding Route 606, which just doesn't feel the same when seen from inside of a bus.

Step into the clouds

My hostel is located right on the edge of the Cloud Forest. There's a terrace that wraps around the entire building just like the kind you'd see around a motel, although this one's way nicer. A hammock hangs from the ceiling in front of each door and from it you can watch the vegetation dance under the rain, hearing the birds and monkeys squawking nearby. 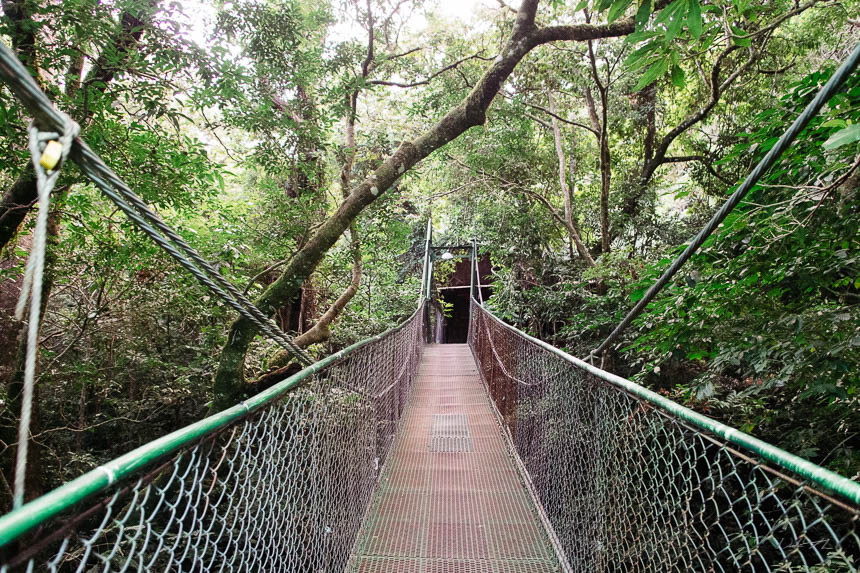 Crossing the bridge to get to my room. 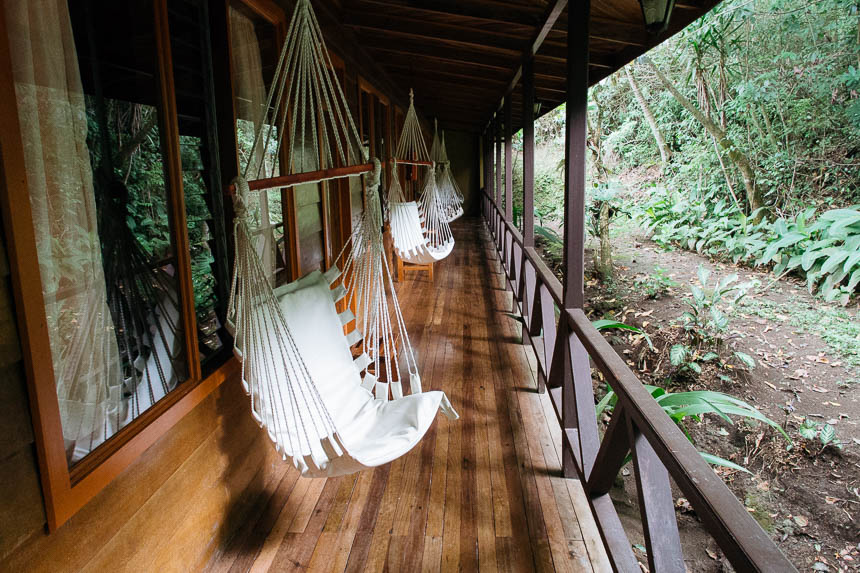 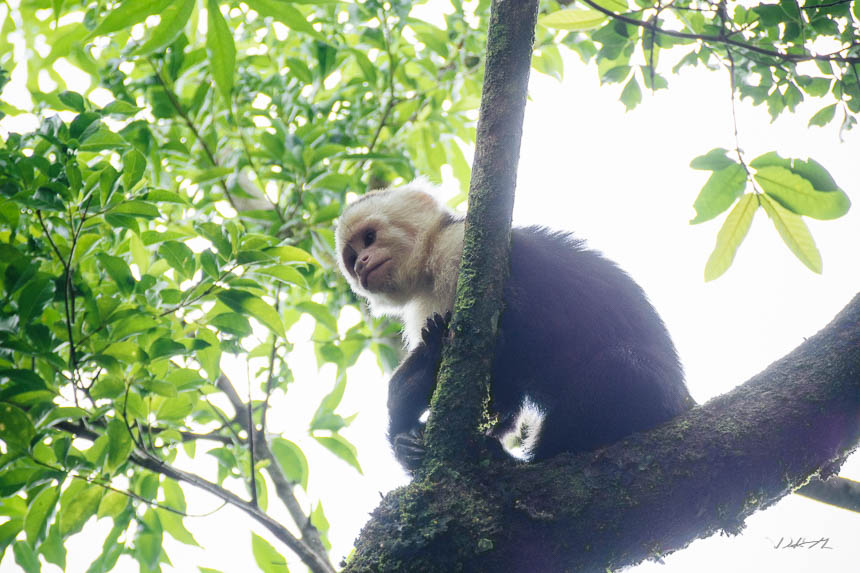 A monkey in a tree outside of my room.

There are two major reserves here. I opt to go with the smaller Santa Elena reserve over the other. From the pictures, the latter's too crowded. I want to experience the cloud forest in a more "unspoiled" state. And that's exactly what I get. 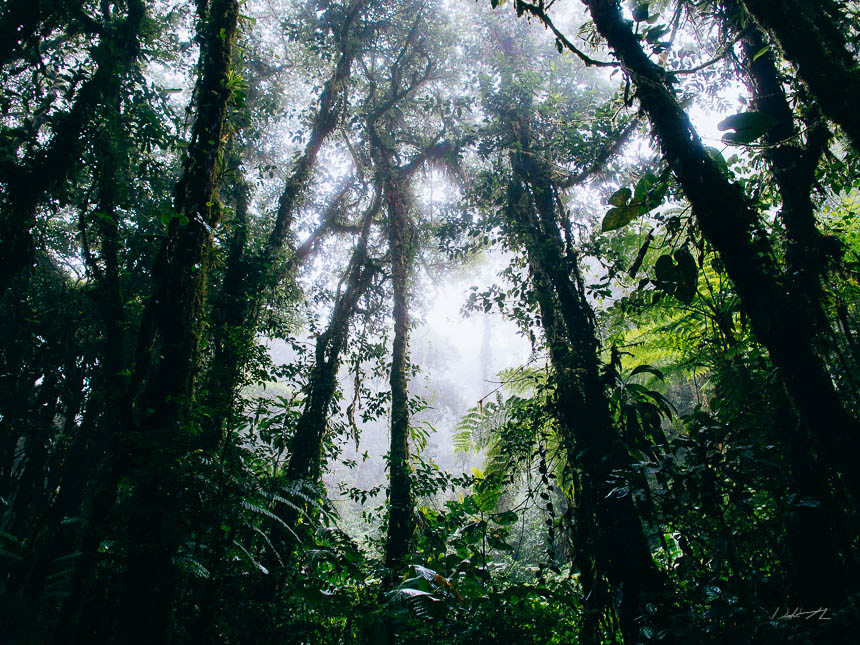 A forest in the clouds. 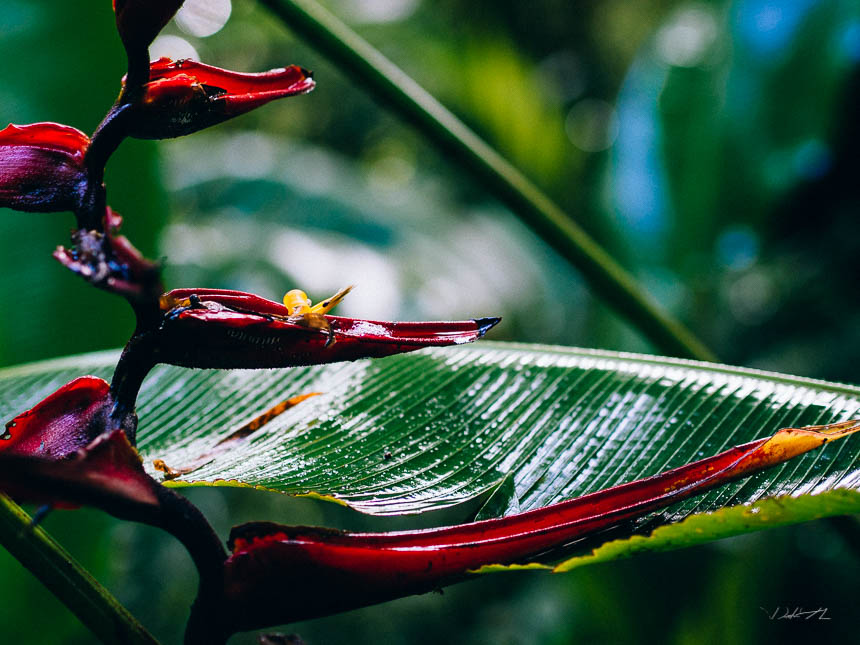 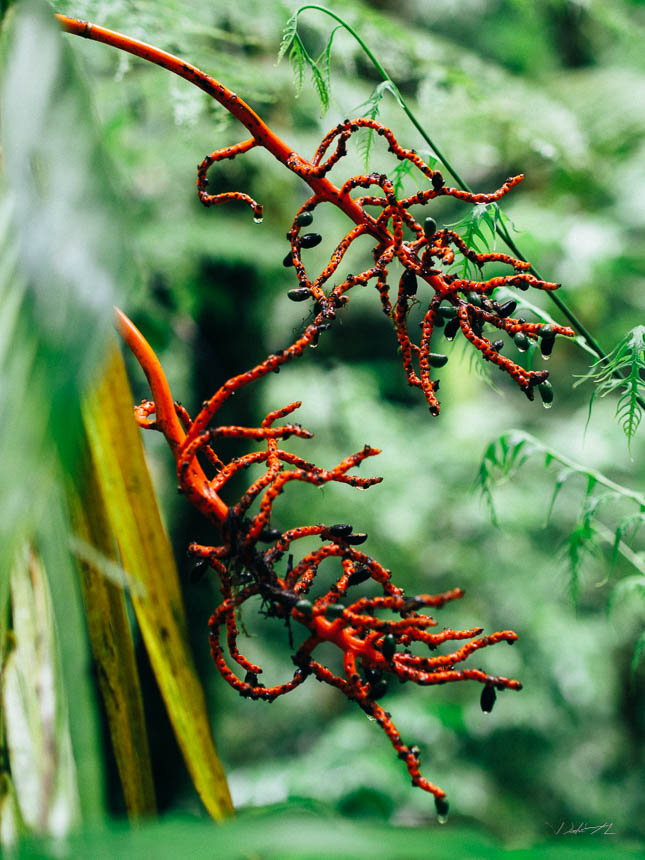 Monteverde's cloud forests have about 2.5% of all of the world's biodiversity, which I learn is a very high figure. I can see it just from the flora. You won't find another forest with so many different types of plants.

These forests are also supposed to be amazing for bird watching, but my Where's Waldo skills are weak. While I can hear all varieties of bird songs, I can't spot them. They're beautiful songs nonetheless. Some are so exotic from what I'm used to hearing in the New England woodlands that I have to wonder if they're actually from a feathered critter and not something else. 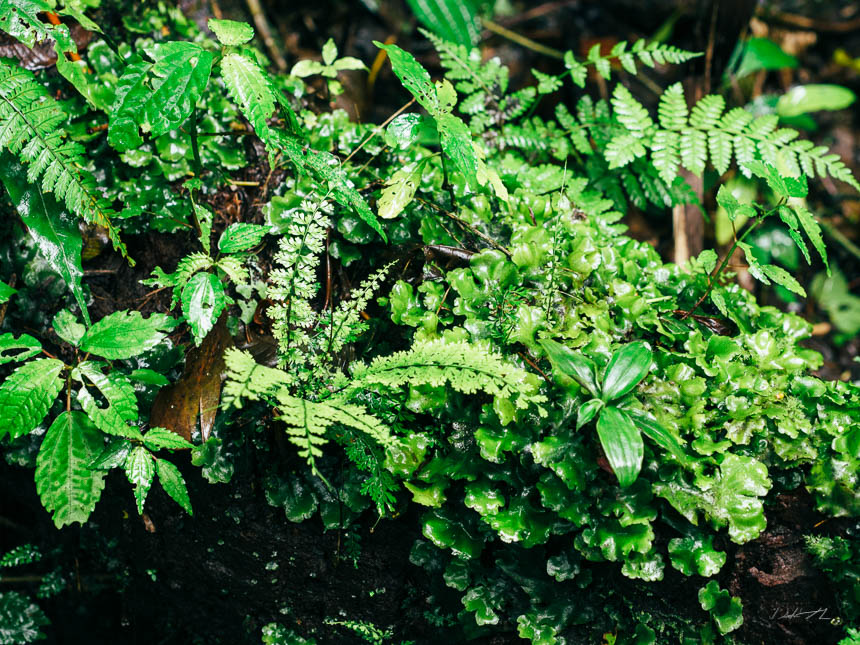 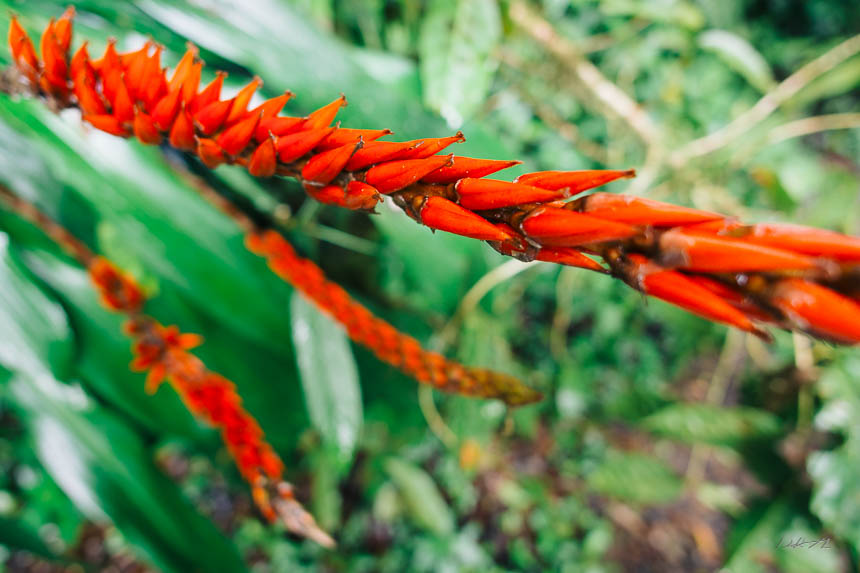 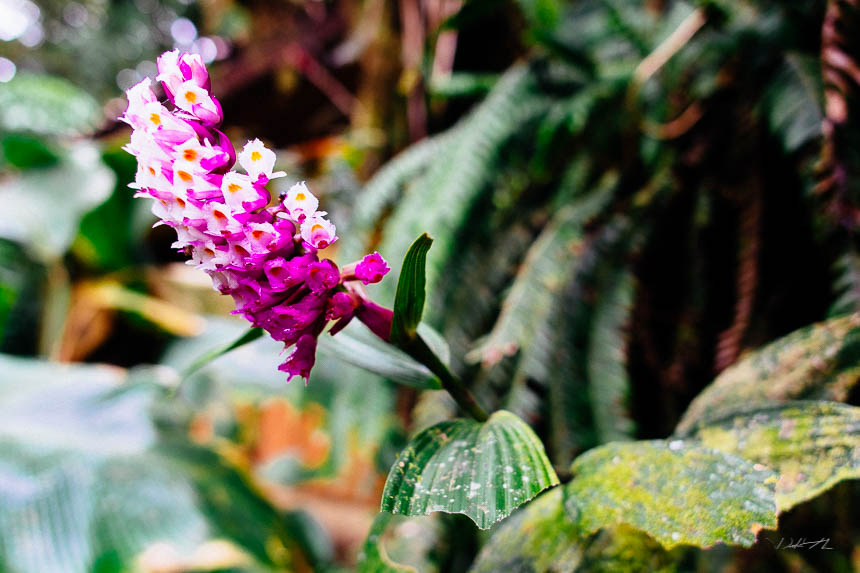 A forest hike at night

Back at the hostel I sign up for a night walk through the forest. To my surprise, it's the hostel manager who's leading us. Apparently, he devoted a good chunk of his life to studying biology in the area. He points out the flora, insects, and frogs along the way, many of which don't come out during the day. Some are frankly creepy, the insects especially. I don't think I could ever be an entomologist. 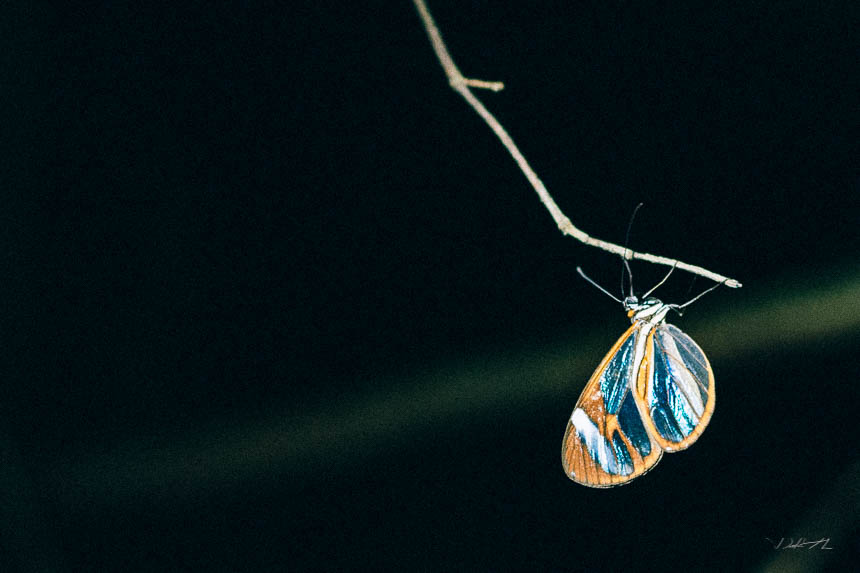 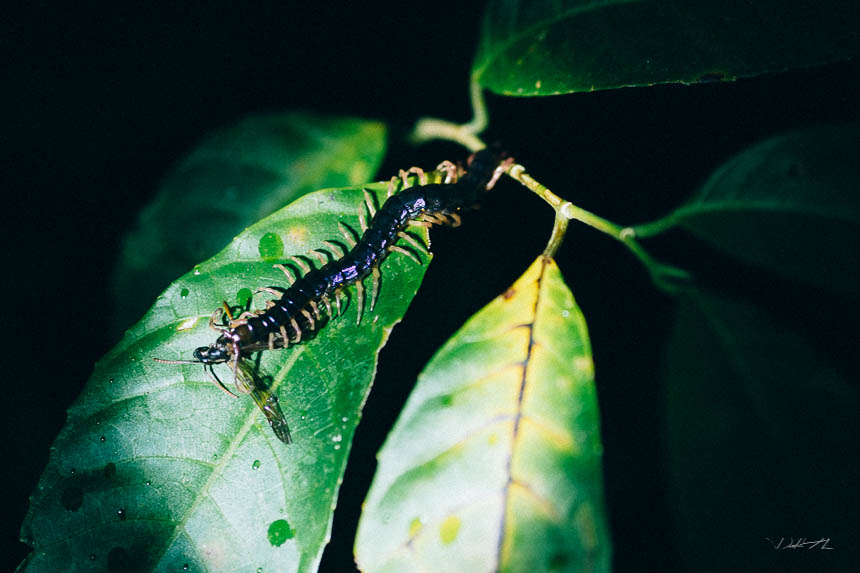 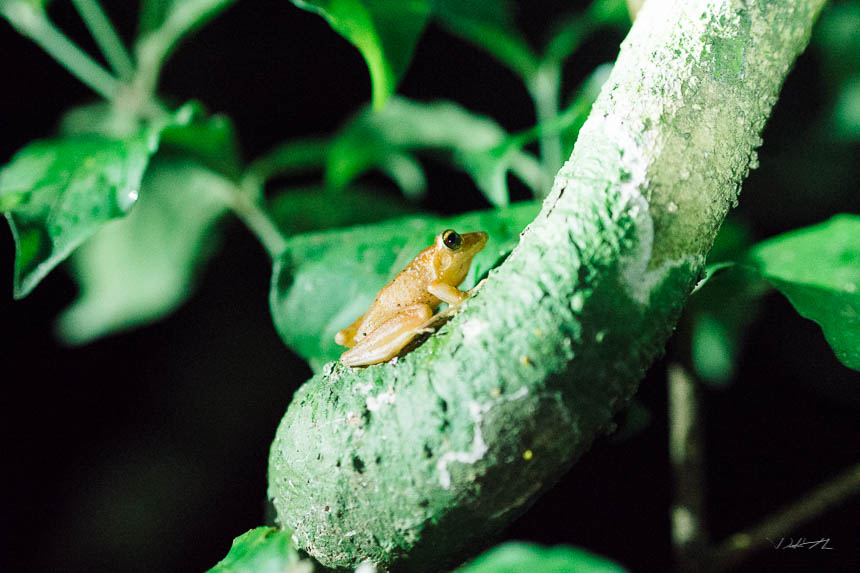 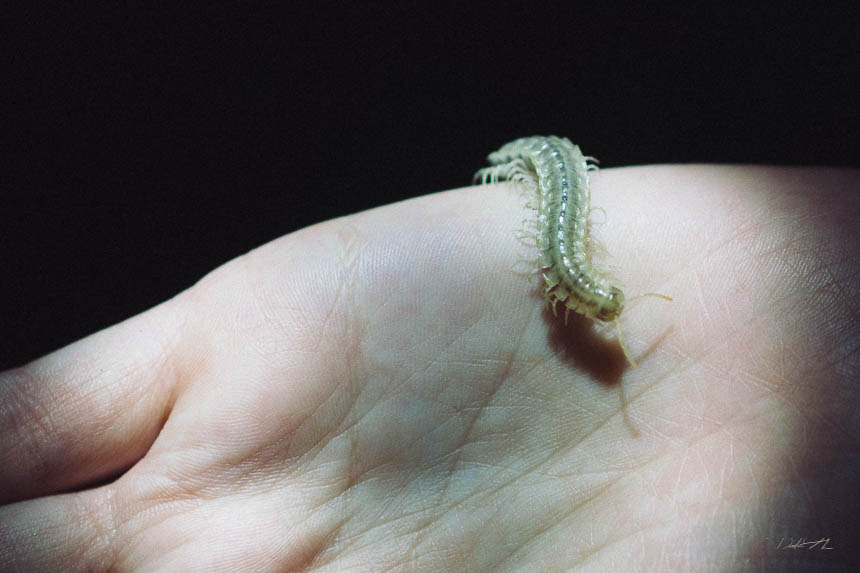 On the morning of my last day in Monteverde I visit CASEM, the Cooperativa de Artesanas de Santa Elena y Monteverde. It's a cooperative for women artisans and I'm here to check out their cafe and pick up a couple of their beautifully handcrafted souvenirs. You can learn more about CASEM here.

The cafe's a charming little place with plenty of dining space and a quaint little kitchen. I order a casado, a Costa Rican meal of rice, plantains, steamed veggies, salad, beans, and a meat (I believe I chose beef). I also have a black coffee, which the cook makes in the Costa Rican way using a chorreador. This is a wonderful place to have lunch. 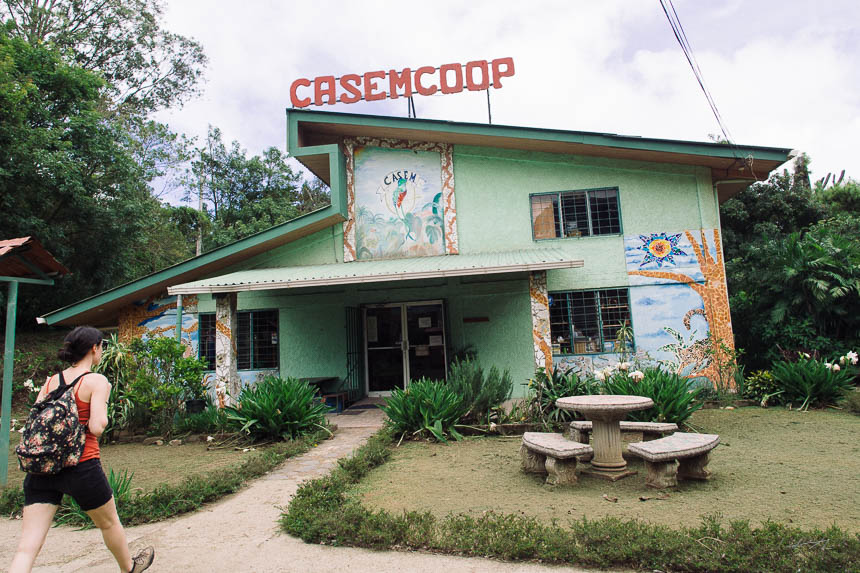 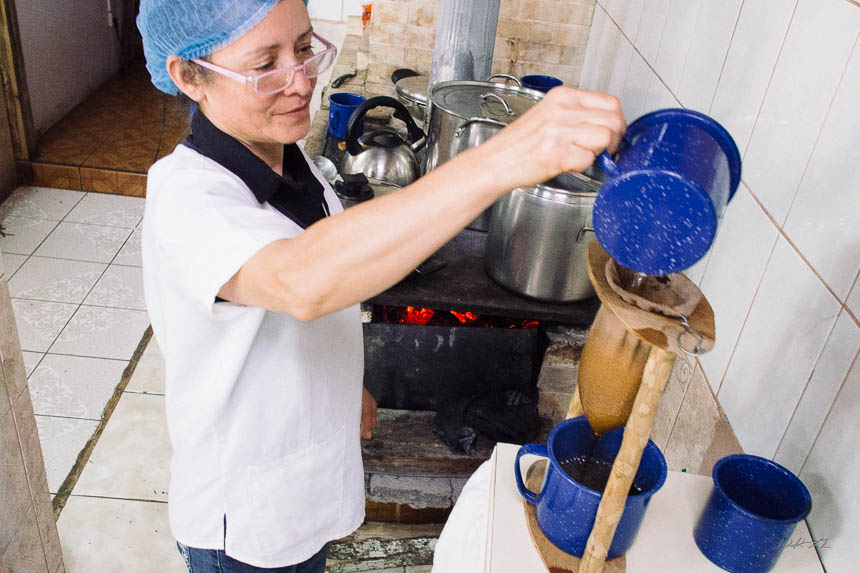 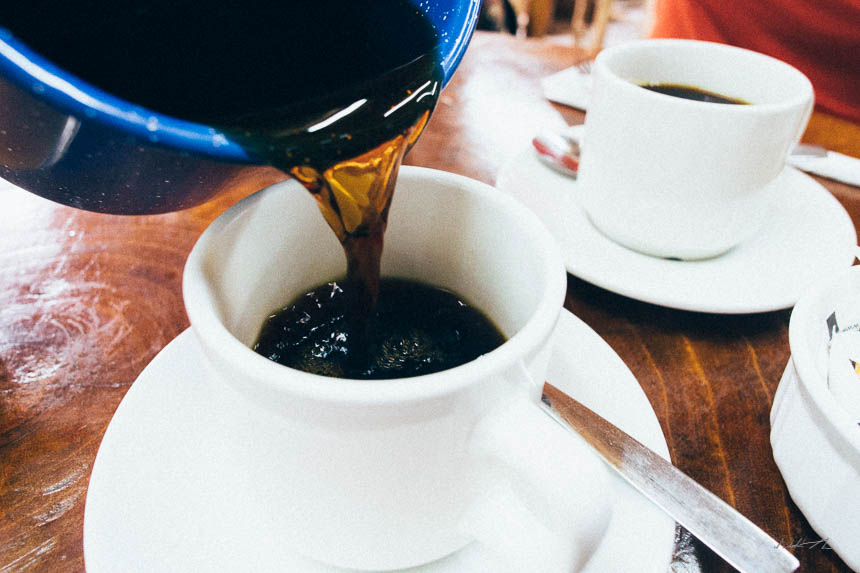 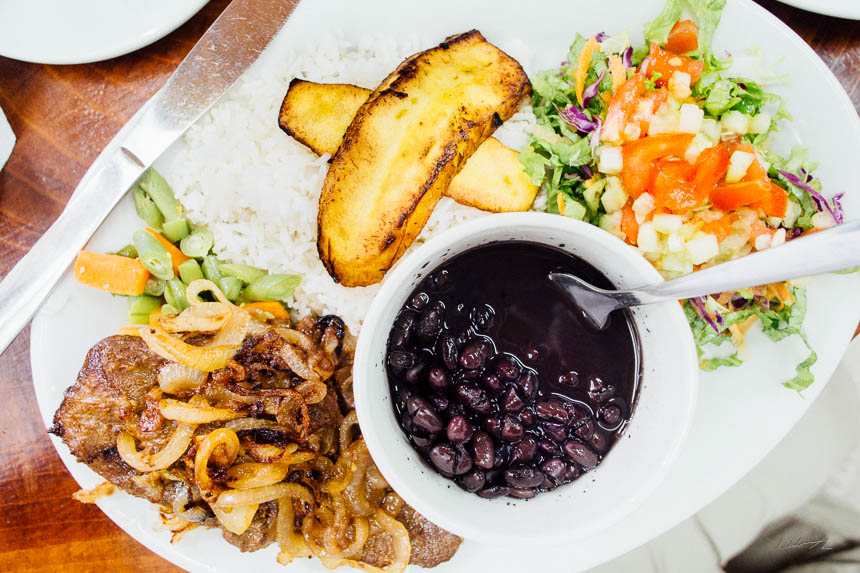 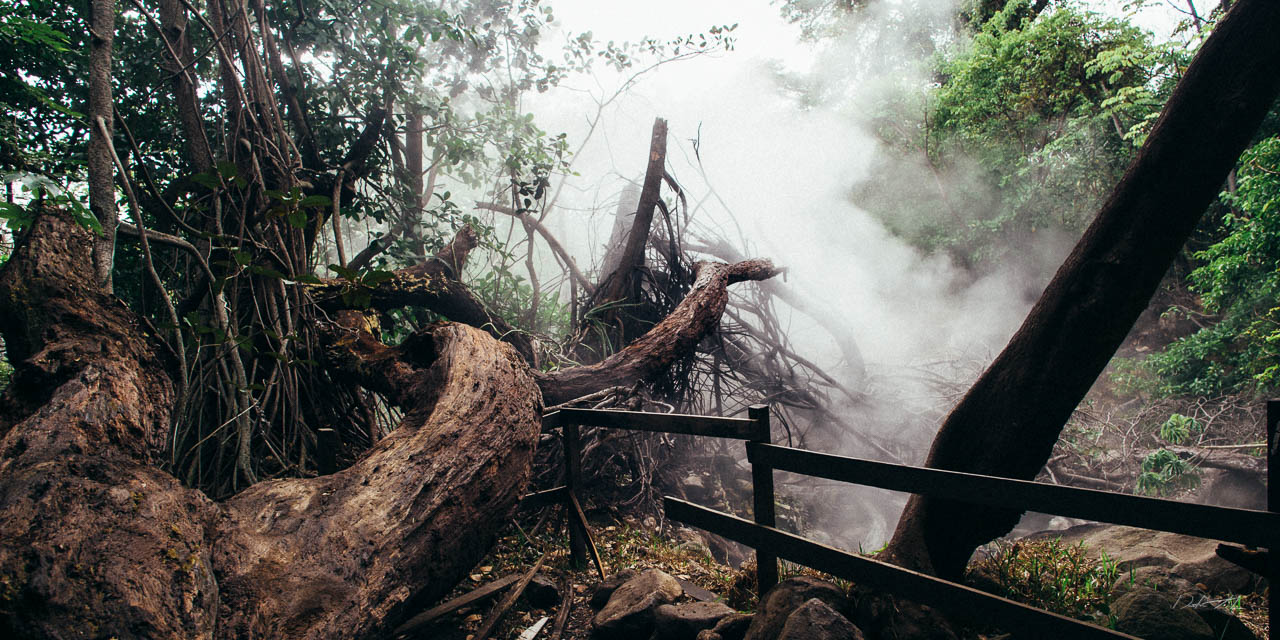 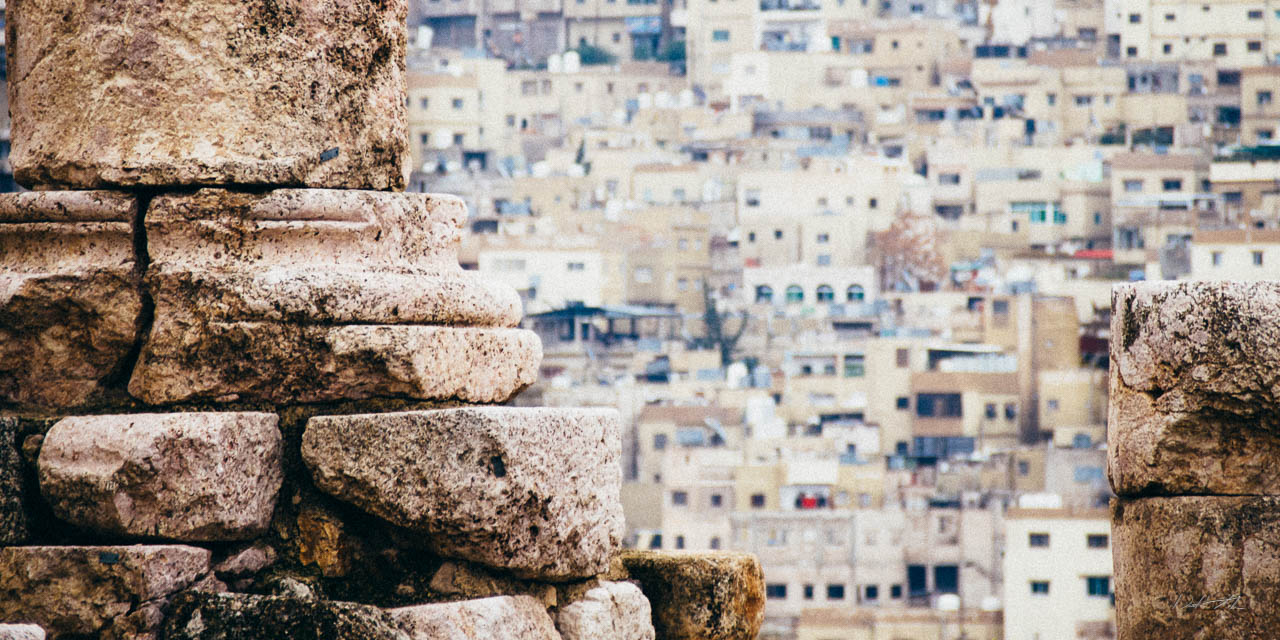