You don't know you like Karsts until you see Karsts.

The ride from Luang Prabang to Vang Vieng is one of the bumpiest I've ever taken.

Nausea compels me to pass out for most of the ride. Each time I awake, however, I muster the strength to combat my carsickness to grab my camera and snap a few frames. The surrounding scenery is just that beautiful.

Oddly enough, I'm least carsick on the last 30 minute stretch into Vang Vieng when the roads are at their worst. My body likely assumed I was no longer in a moving vehicle, but in a mechanical bull ride instead. 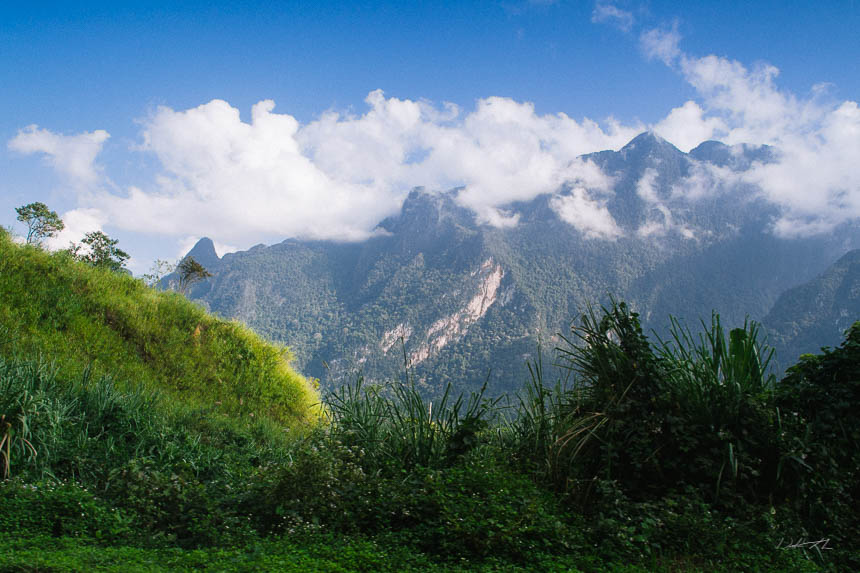 These views are pretty, but the roads not so much. 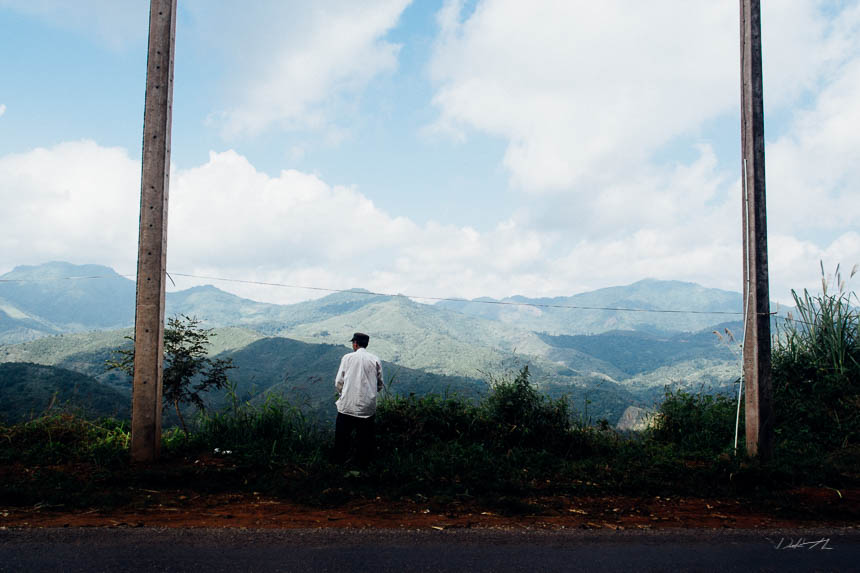 Epic roadside leak by our driver.

I rent a motor scooter, which turns out to be not the wisest choice. The roads are pocked with potholes the size of buckets, which makes for a perilous ride—at least for this inexperienced rider. I have a couple of scars on my knees to remind me of that.

That said, I catch some beautiful scenery on the 43km loop through the karsts. 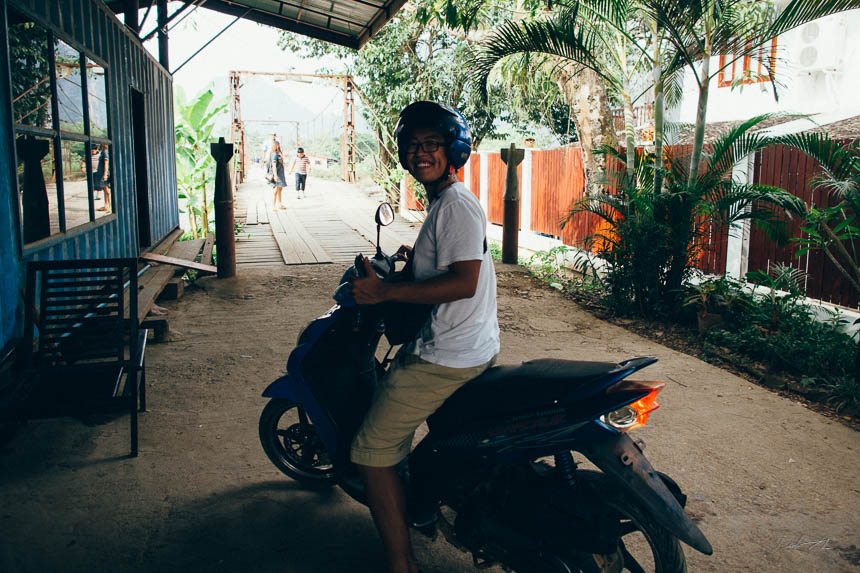 That's me after picking up the scooter, still so naive, so ingenuous.

These are two things I look out for on this loop: small children and bovine.

The former like to dart out into the middle of the road and flag down anyone with a helmet, usually a sure sign of a tourist. They'll ask for money. Failing that, they'll ask for candy. Where am I supposed to find candy here? 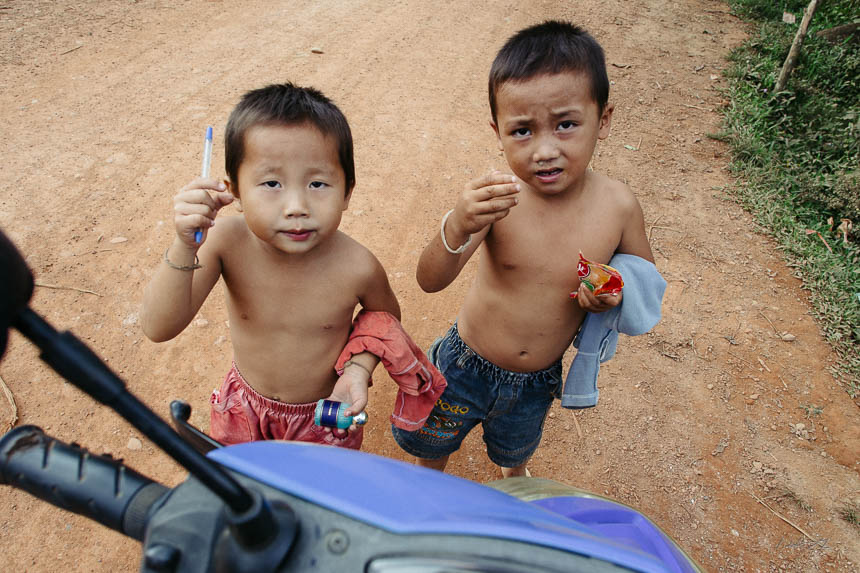 The one on the left has a pen for I dunno why.

There are also plenty of cows. Unlike the children you can't really shoo them away. There's not much to do but wait for them to move on their own. 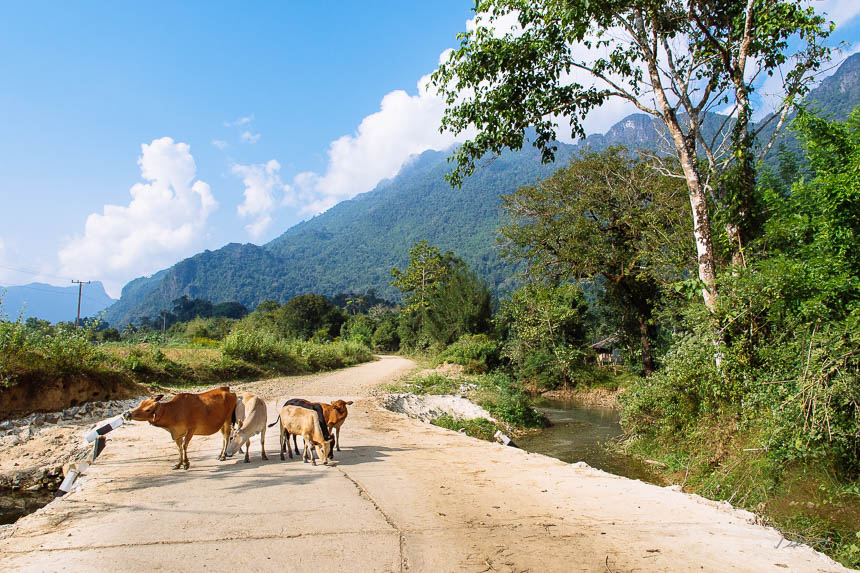 Moo. Do I have the finesse needed to maneuver around these guys? Probs not.

This is what this loop is all about. Karsts.

Karst (n) /kärst/ - landscape underlain by limestone that has been eroded by dissolution, producing ridges, towers, fissures, sinkholes, and other characteristic landforms.

It's really an experience to drive through a valley surrounded by these jagged formations. Truly breathtaking. 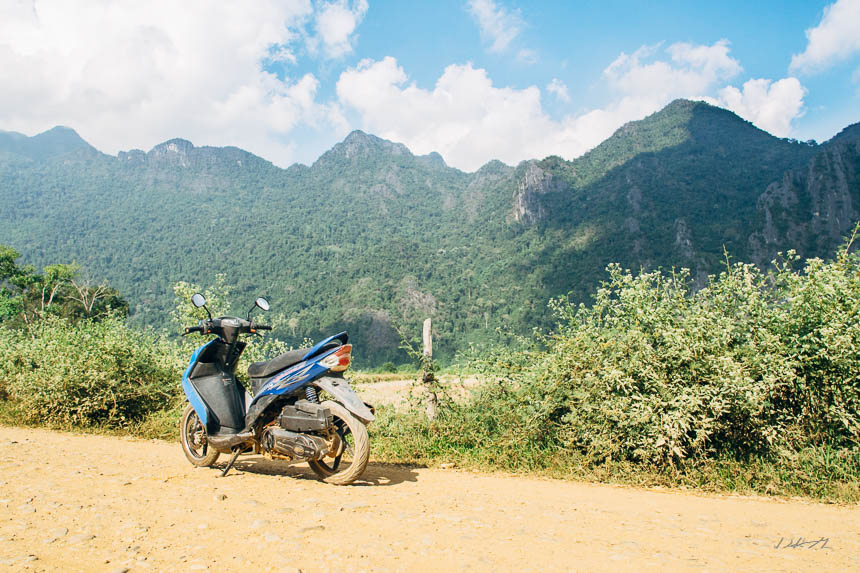 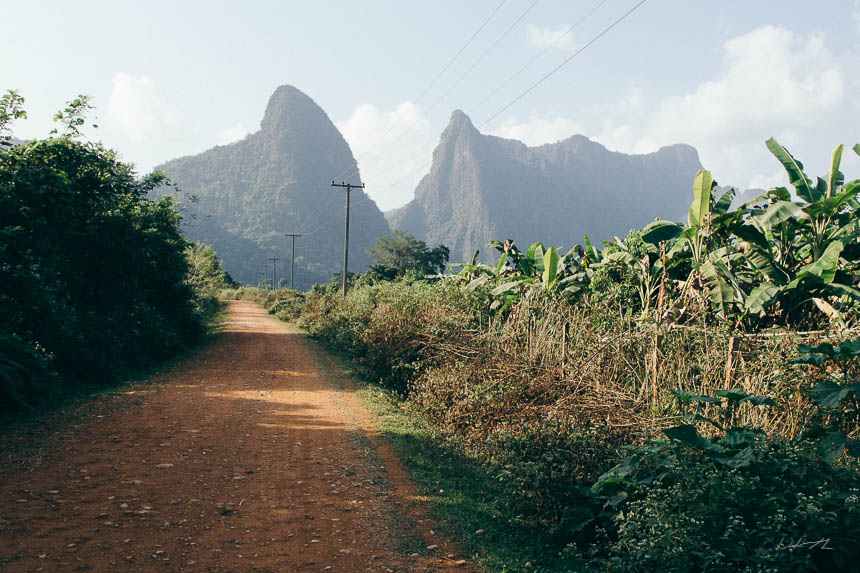 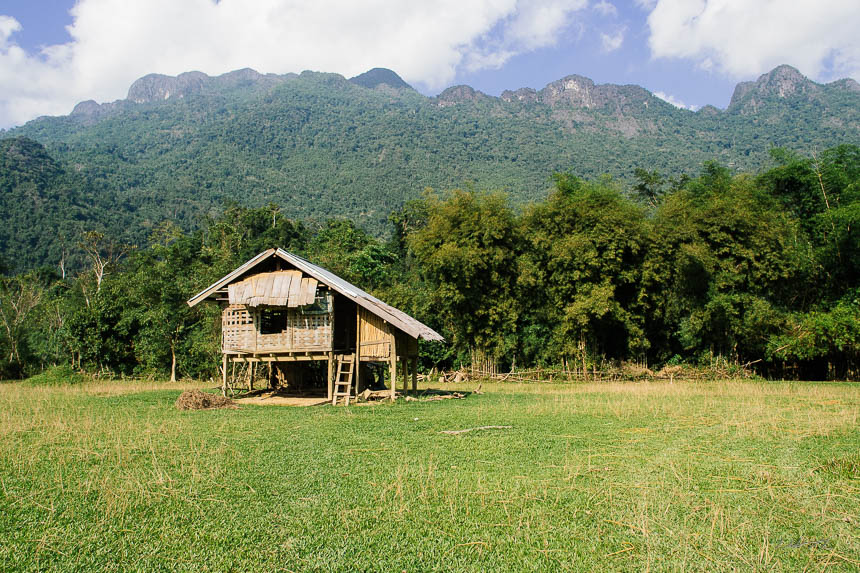 If they had an Airbnb for this house I'd be all over it. 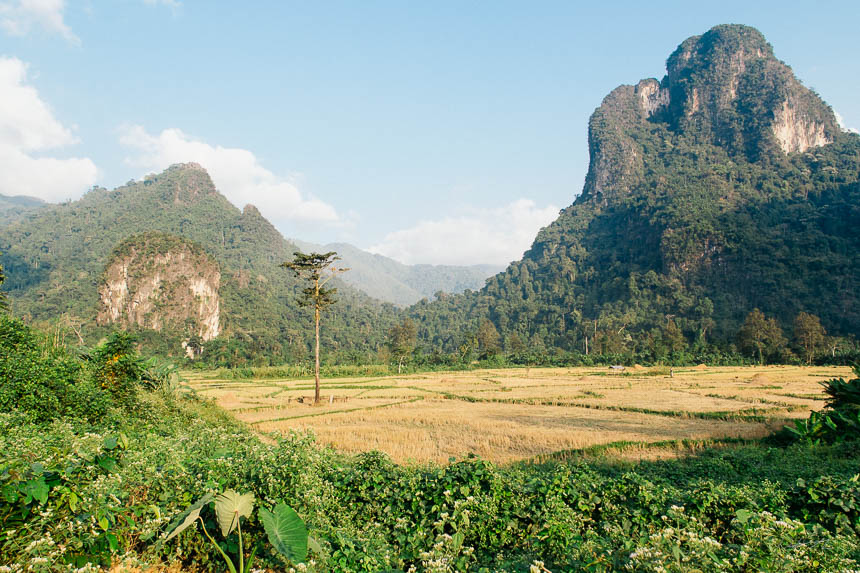 I take a small detour off the loop towards this small remote village (which I think is Ban Nampè). There's a steep downhill before the river and out of reflex I pump my brakes too hard, lose control, and have what you could describe as the clumsiest crash, a weird half collision unfolding in slow motion. I end up with a deep cut on my left knee and I'm hoping nothing's broken.

A kind stranger helps me up. He's headed in the same way and offers to lead me to the small village I'm trying to find. I confirm that there's nothing broken and hop back on my scooter. It turns out this path is in even worse condition than the main loop. There are some areas that are flooded as well and I muster all of my focus to balance along makeshift bridges, wooden planks, that are just why of being a foot wide.

This is an adventure, no doubt, and it doesn't end when I reach the village.

Nearby is a river and wanting to wash off a bit I wade in. By the time I'm back out, a few small leeches have attached themselves to my feet and legs and are pumpin' away drawing blood. It's not painful or anything, just really uncomfortable to see happen. I find it a bit unsettling to pinch each one off because shaking them just won't do. 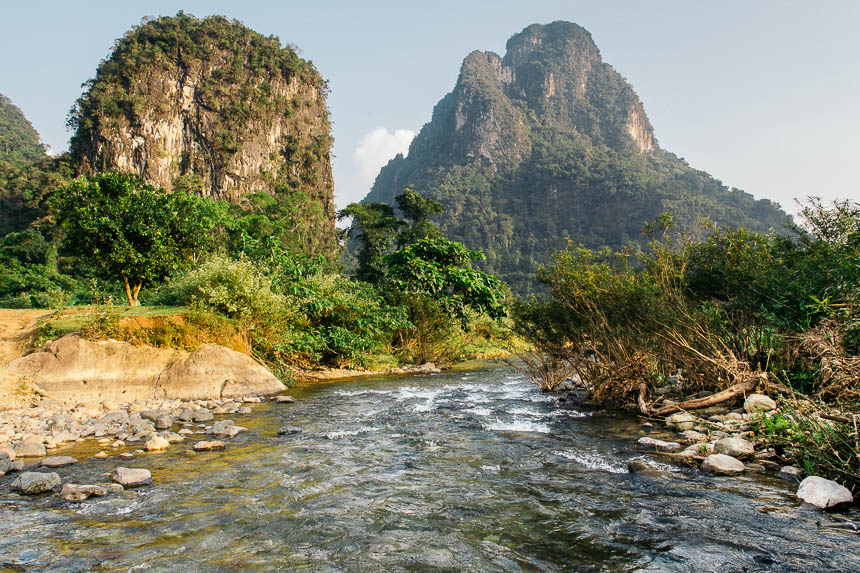 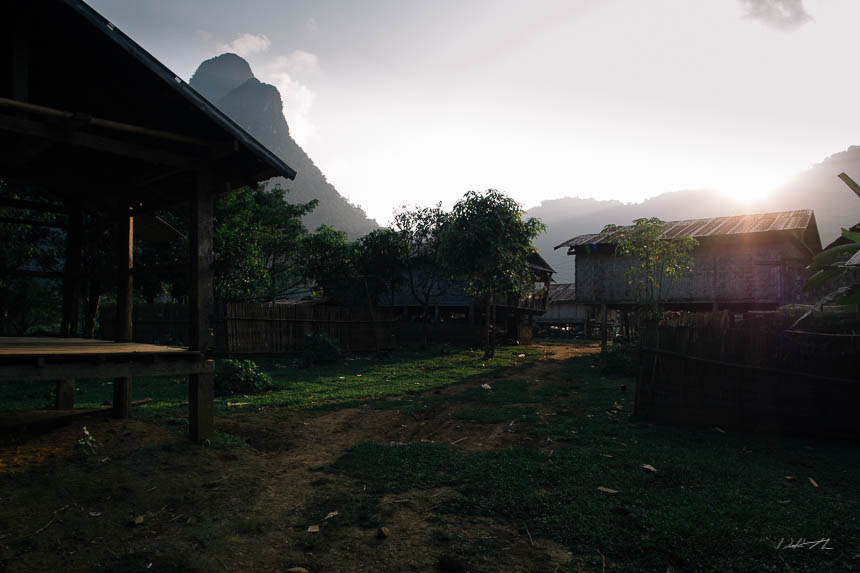 The little village off the loop (Ban Nampè?).

Riding into the sunset

I've lost enough blood for one day and there's a long ride ahead of me. It's time to head home.

On my way, I exercise all of the self control I have and ride past places I ordinarily would have stopped for pictures. The black of night's encroaching on me faster than I expected.

More than a sixth of my ride is done in the darkness. There aren't any streetlights and I quickly learn that the rental scooter I have headlights as bright as a night light. So that I don't flying off the road or have a pothole launch me off my bike I crawl along at 10km/h.

You could say I'm relieved to make it back home in piece.

(Would do all of this again.) 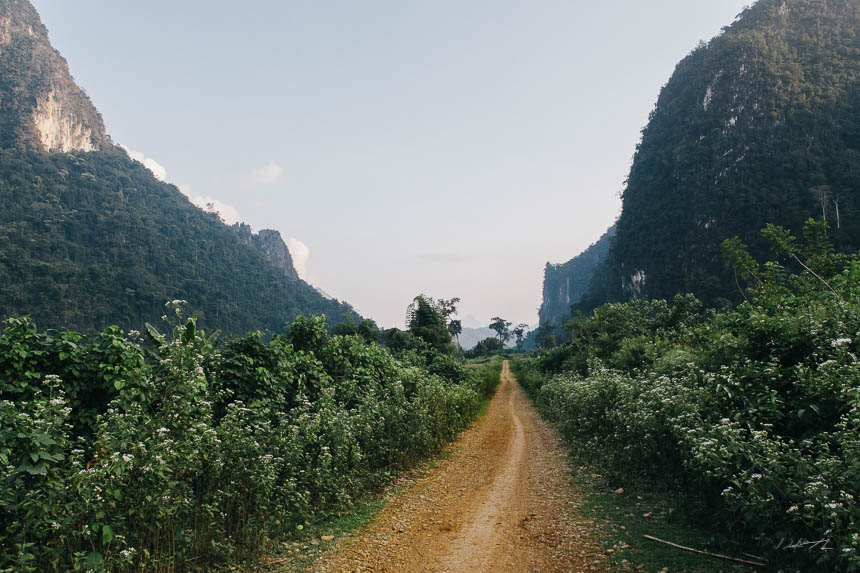 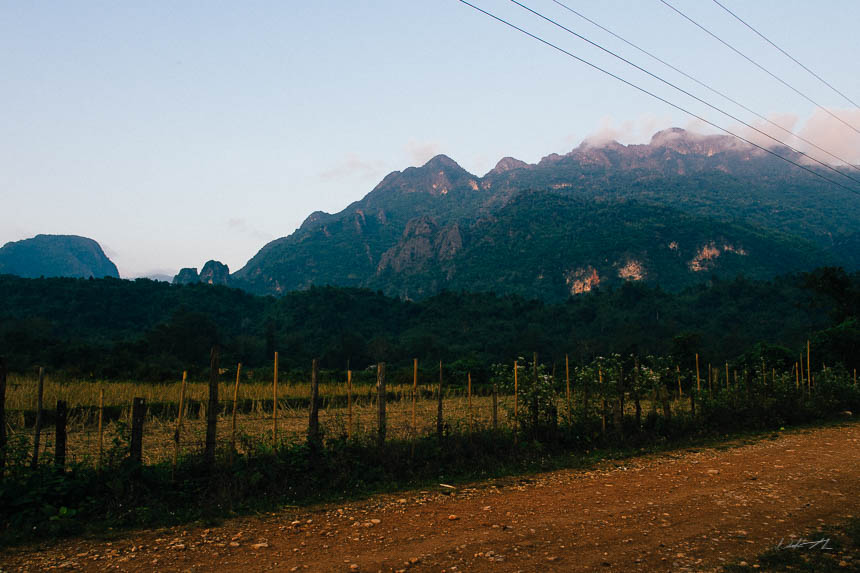 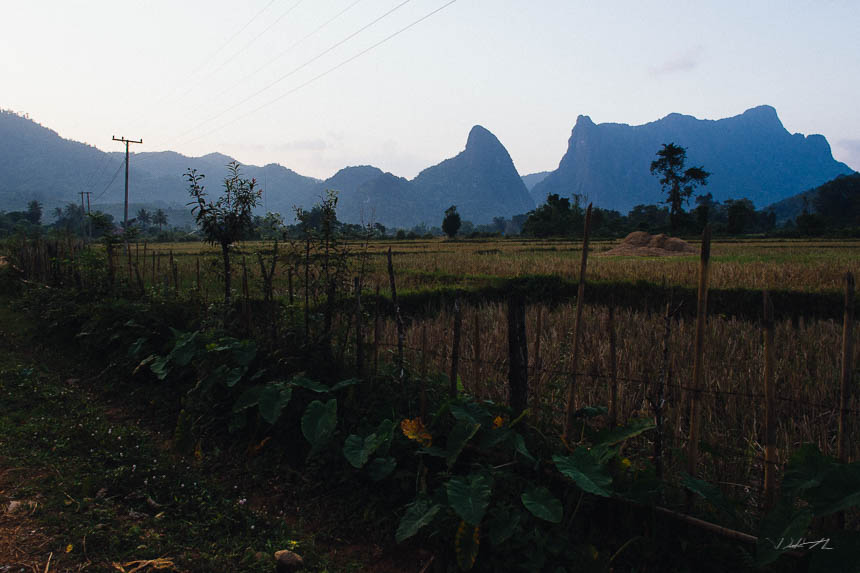 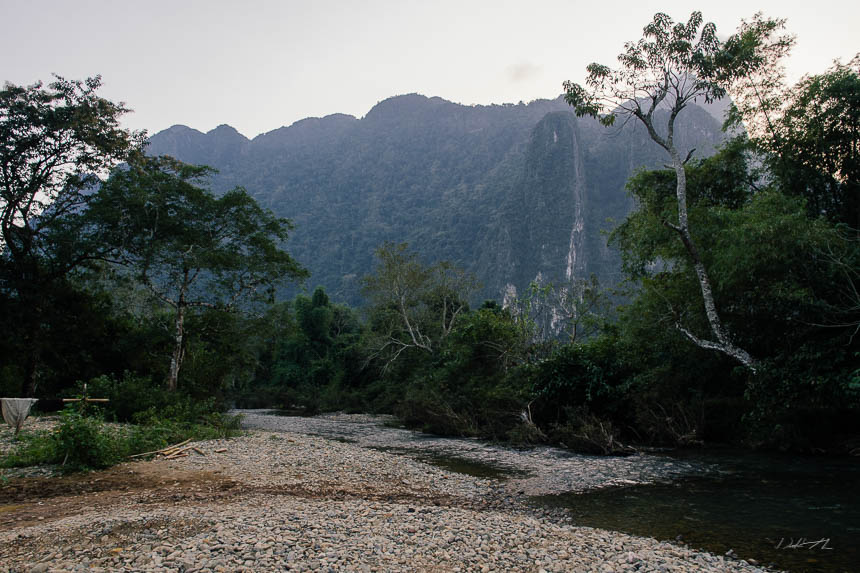 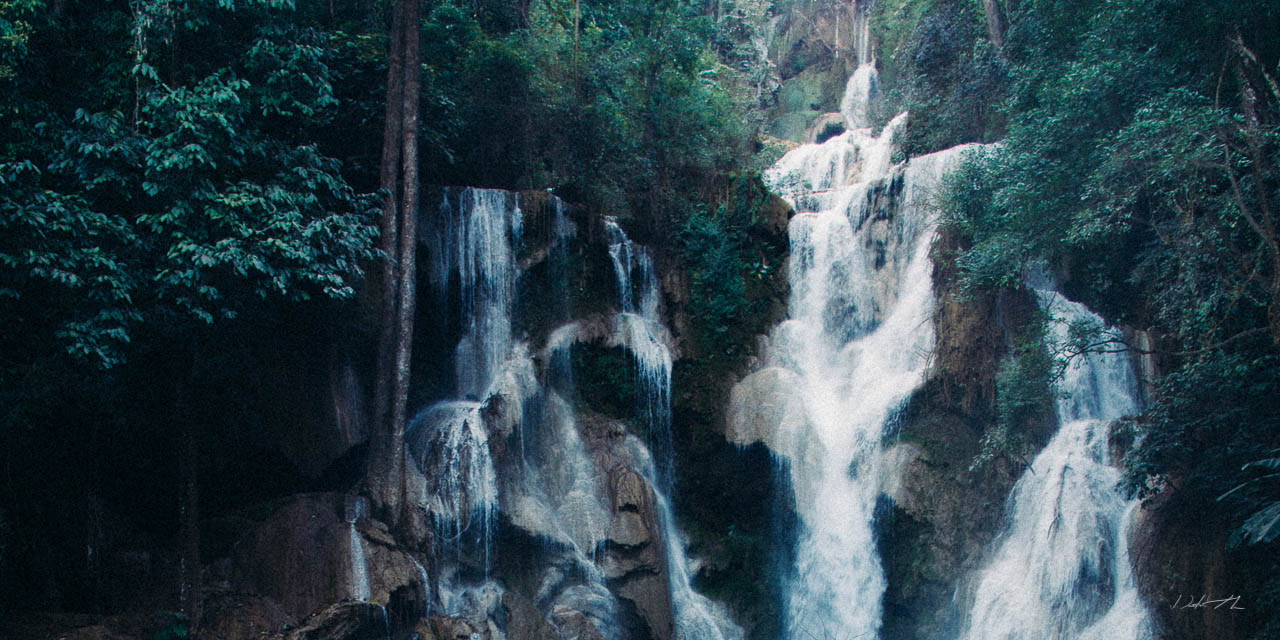 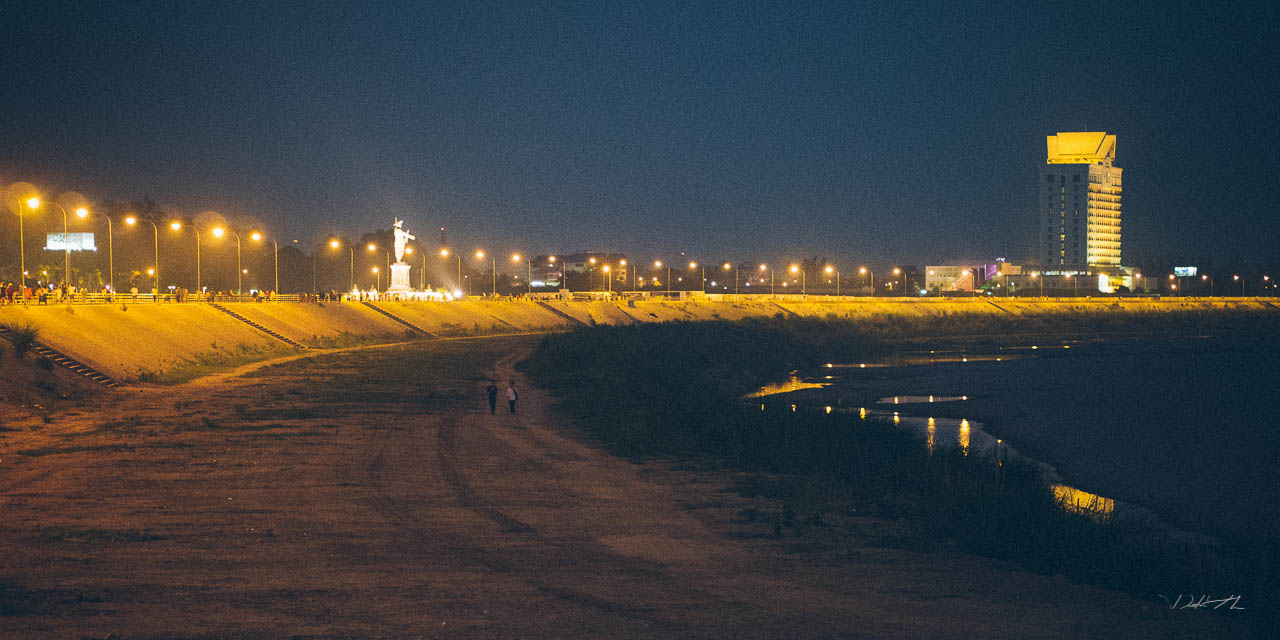