There's plenty of wildlife in the veldt and woodlands of Kruger.

Our guides pick us up from the Olifants rest camp where we've parked. We pack our bags into a trailer hitched to our safari vehicle and hop in. It takes us a couple of hours to get to the camp we'll stay at for the next three nights.

On our way we see a vibrant sunset and a few animals near the road. We also learn about the poachers from Mozambique who cross the border only kilometers away from us and have killed numerous rhinos already this year. From the dirt road I spot armed military patrols in the distance keeping an eye out for suspicious activity. 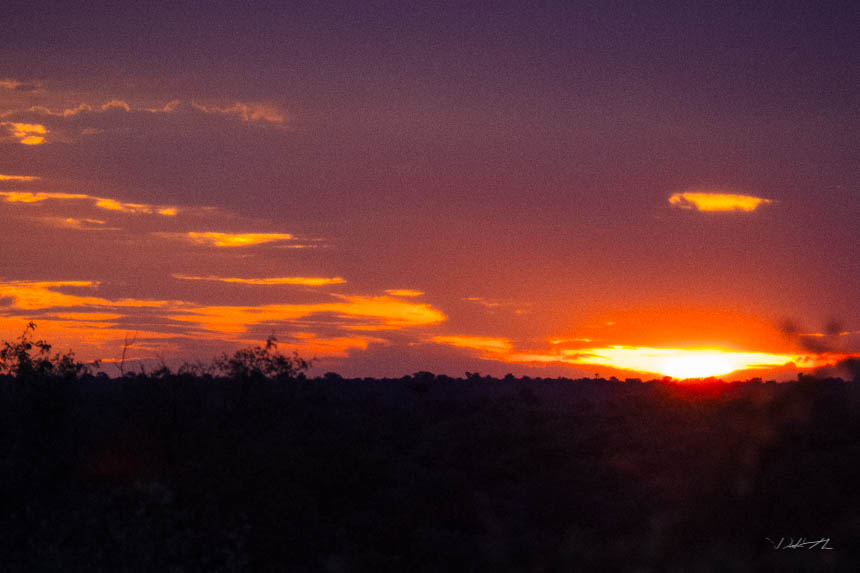 Sunset on the road to camp. 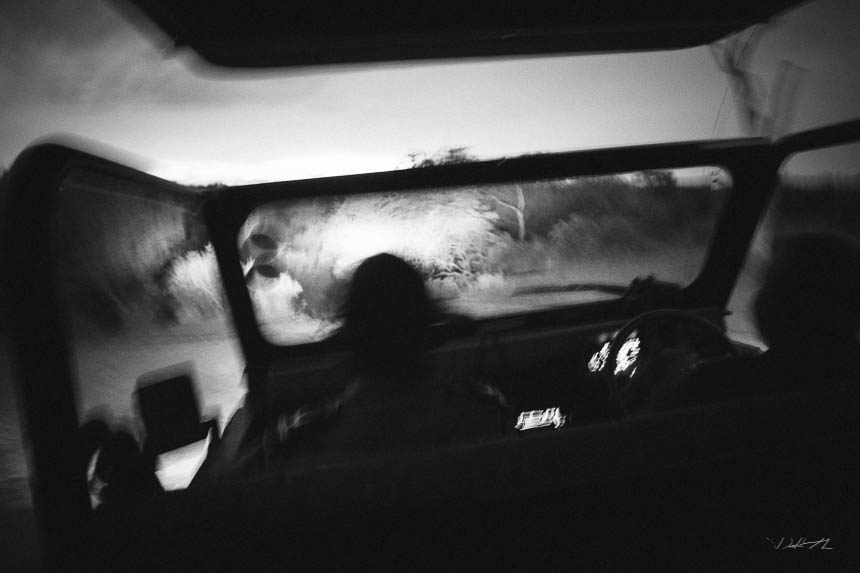 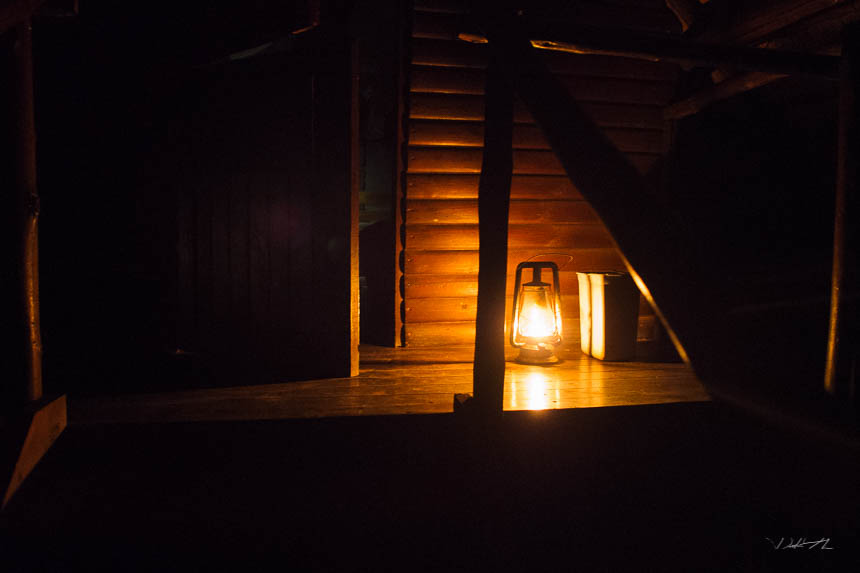 We arrive at night.

I have a lot of respect for wildlife photographers going into Kruger. Wildlife photography is hard. Most of the time I feel like I'm grabbing good shots by pure luck as much as timing, composition, and general skill. 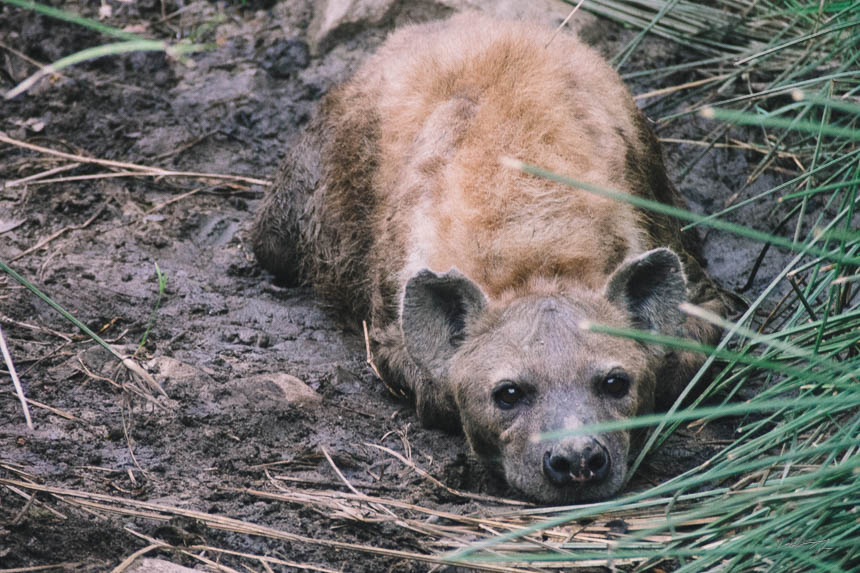 A hyena on the prowl in a dried stream next to our safari vehicle. 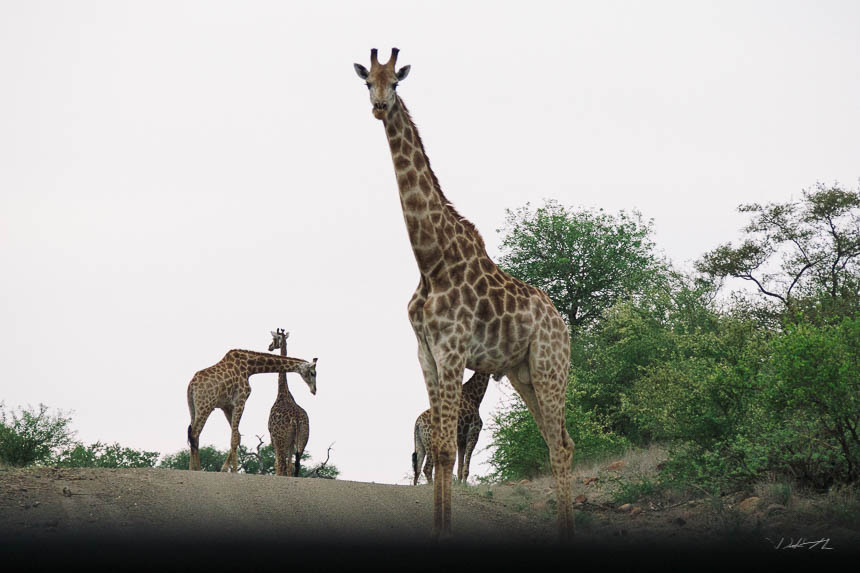 Giraffes on the road. 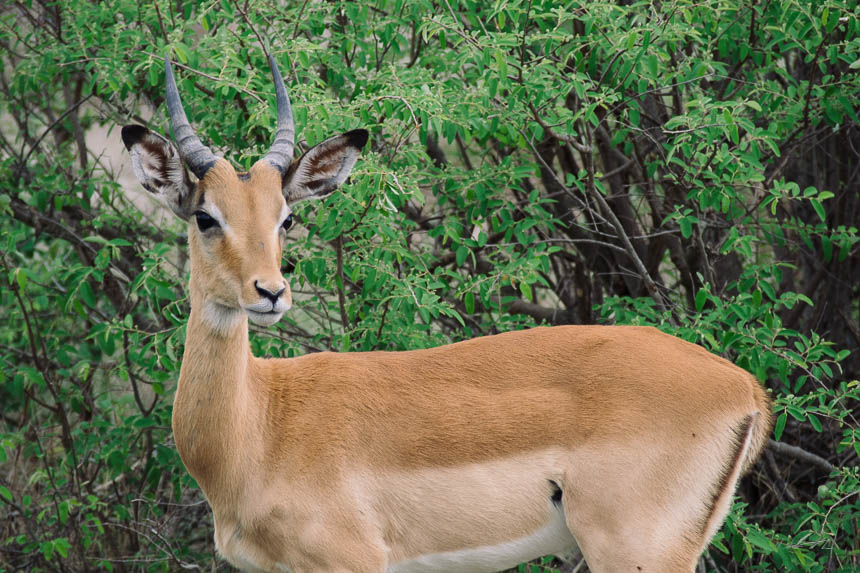 Yellow-billed bullhorn in a tree above our camp. Almost 90% of my wildlife photos happen because of our guides. Their senses are so attuned to locating wildlife that it makes me feel as if my senses are somehow dulled. I can understand how I miss the tiniest of birds that they find foraging in the trees, but there are times when they spot animals as large as elephants and giraffes in the distance that I don't.

And then there are things that are really difficult to miss.

We spot a flock of vultures circling over a field. It's an ominous sight to see so many and our guides insist we go for a closer look. A pungent smell overcomes us. This is a sense I register without the aid of the guides. Closer to the source of this rot, the sound of a thousand flies, their collective buzzing more accurately described as a perturbing low hum.

We walk around a bush to confirm the guides' fears. This is a rhino, half decomposed. It's a horrendous thing to see. Where it's horn should have been is a deep gash. Vultures have ripped through their share, leaving the remains to the flies. Our guides radio in the discovery passing details of our approximate location.

Poaching is a relatively new phenomenon in South Africa. In 2007, 13 rhinos were killed. That number rose sharply to 1,004 in 2013, the year of my visit. It's an unfortunate trend that's also killed poachers and park rangers. I can only hope that demand thins out when its market realizes that rhino horns do nothing to solve impotence, cancer, or other disorders. All three days follow a similar template. We rise early, have three meals, hike two trails, set up a campfire, and go to sleep smelling of smoke.

One morning we start near a rocky bank by the Olifants. We're here to admire the landscape, watch how the river bends, learn about how it floods, and about the wildlife that inhabits the river.

There are a few beaches we have to cut across. There is a crocodile not too far away and fresh hippo trails in the sand. Crocodiles sound menacing, but I learn it's the hippos we have to fear. They're capable of running really, really, fast over any terrain and could rip you to shreds. And here I thought they were friendly creatures. I blame Hasbro for that misconception. 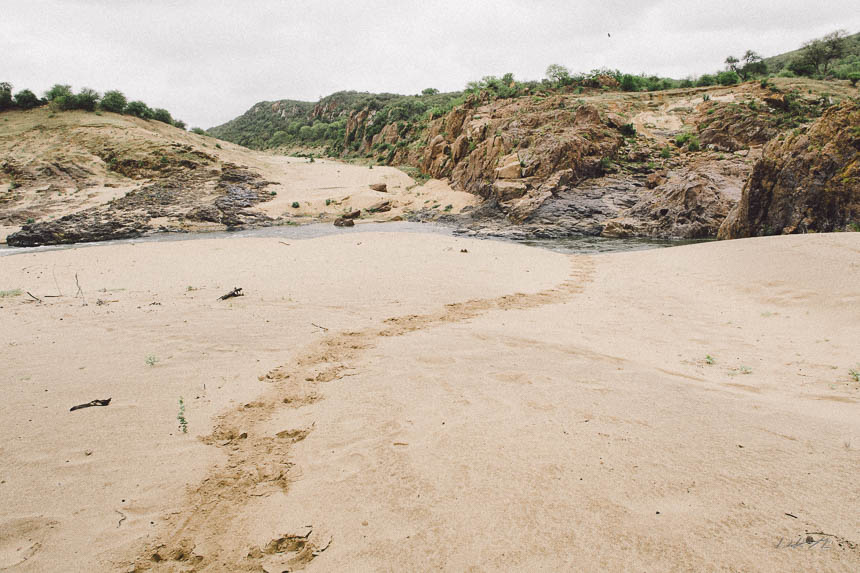 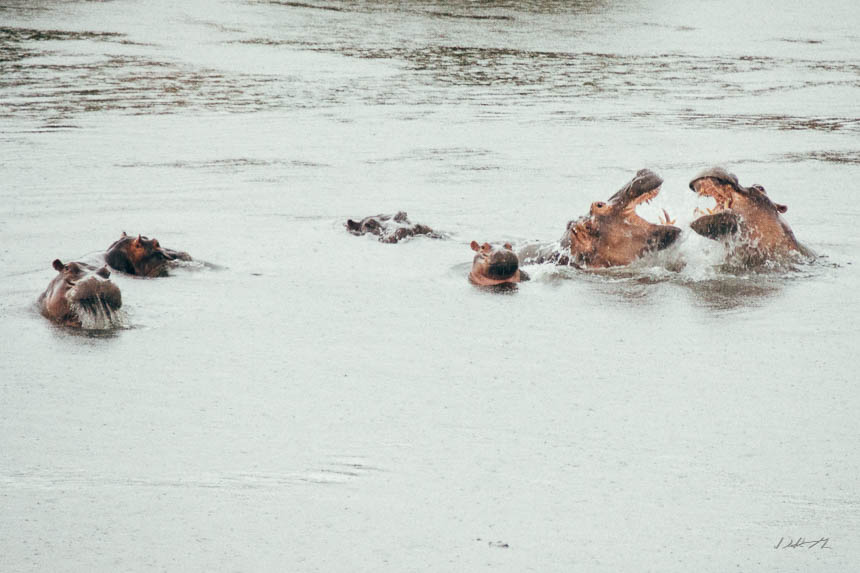 Our afternoon hike is a bit lengthier. We don't see too much wildlife today, but there are plenty of baobabs that we spot. We rest on a hilltop to watch sunset over the river. A large family of elephants is playing not too far away on the other side. 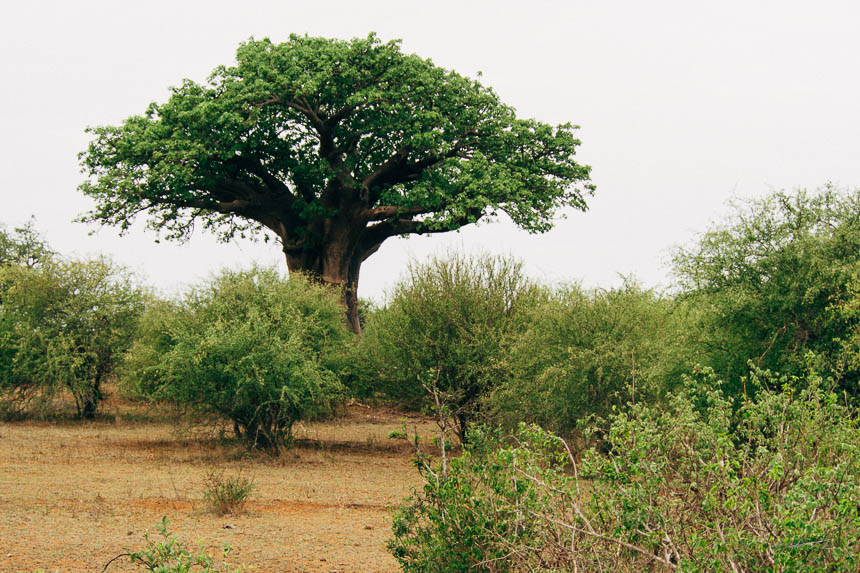 At camp, dinner is waiting for us, another hearty meal prepared with love by our chef who knows his stuff. Honestly, good food was the last thing I was expecting when I booked this excursion. And yet, here we are, eating like kings.

After our meal we sit out by the fire. I take leave of our group and walk to the edge of our camp to stargaze. In the remote wilderness, there's barely any light pollution visible. On our way out

We see a lot on our way out including the sun, which had hid itself behind the clouds for the length of our stay. 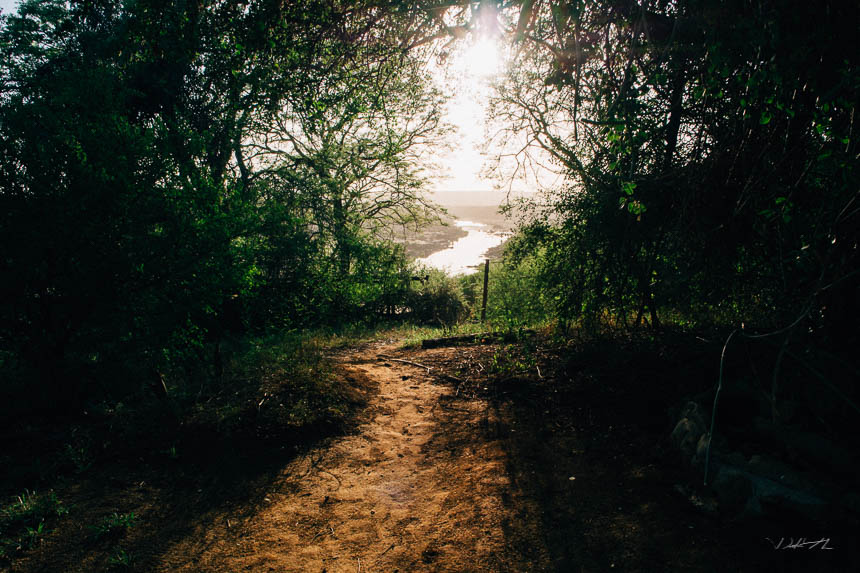 The Olifants basks in sunlight this morning. The veldt in sunlight a.k.a. technicolor. 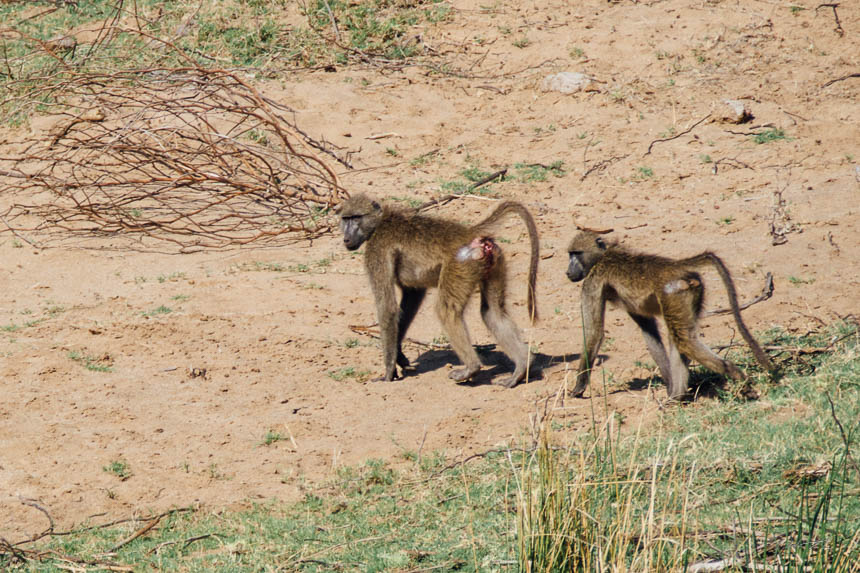 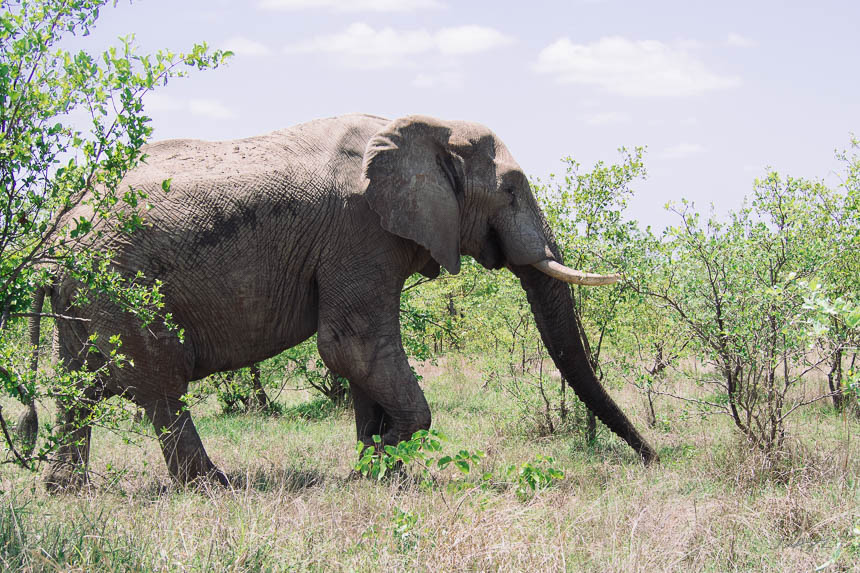 An elephant up close.