The Mosque at Jebel Haroun

On this sacred mountain is a mosque, a shrine, and the likely location of a prophet's tomb.

A place of great sanctity

This is an important place to many people so I spent a bit more time than I ordinarily would learning about its history.

The mosque I'm visiting was built in 1363 by the Sultan of Egypt over a shrine that had existed there since a thousand years earlier. Both the shrine and the mosque were built to honor the prophet Aaron, Moses' brother, who is highly revered in all three monotheistic religions, Islam, Christianity, and Judaism.

For a long time, Bedouins kept a close guard of the mosque and the shrine away from non-Muslims. It wouldn't be until much later when Petra rose in popularity with tourists that others were allowed to visit the summit. Today, it's a popular pilgrimage site for Jews, Christians, and Muslims alike.

Muslims have one more reason to appreciate the shrine. One story tells of a young Prophet Muhammad who climbed Jebel Haroun with his uncle to visit Aaron's shrine. In some ways, the mosque and shrine are as much a dedication to Aaron as they are to Muhammad. In his honor, there drapes over the shrine a green cloth.

The many difficulties of this trail, enumerated

To follow the pilgrimage route I start at Petra near the colonnaded street. The trail head is somewhere behind the Great Temple.

The local guides who roam the colonnaded street in Petra, on learning that I'm headed for Jebel Haroun, make an exaggerated face of bewilderment followed by proclamations that I'll never make it there on my own. I'd be, according to them, most wise to take them on as a guide. JOD 60 is all it'll take. No? How about JOD 40? And a donkey. OK, without the donkey for JOD 20 then, yes? They drive a hard bargain.

If you've ever walked through Times Square in New York as a tourist, you might be familiar with this feeling of people selling you on experiences—a Broadway show here, a comedy show there, the double decker buses that are the only way to really see Manhattan. This felt very similar and because of it I was all the more resistant.

I turn them down. Path finding is part of the adventure. Once the guides give up hope on me, they become quite helpful, giving me as many directions as I can remember. The cynic in me thinks it might be a ploy on their end to overwhelm me with information, one last ditch effort to convince me that their services really are necessary.

But I've got it all down in my head. Or so I think, anyway. 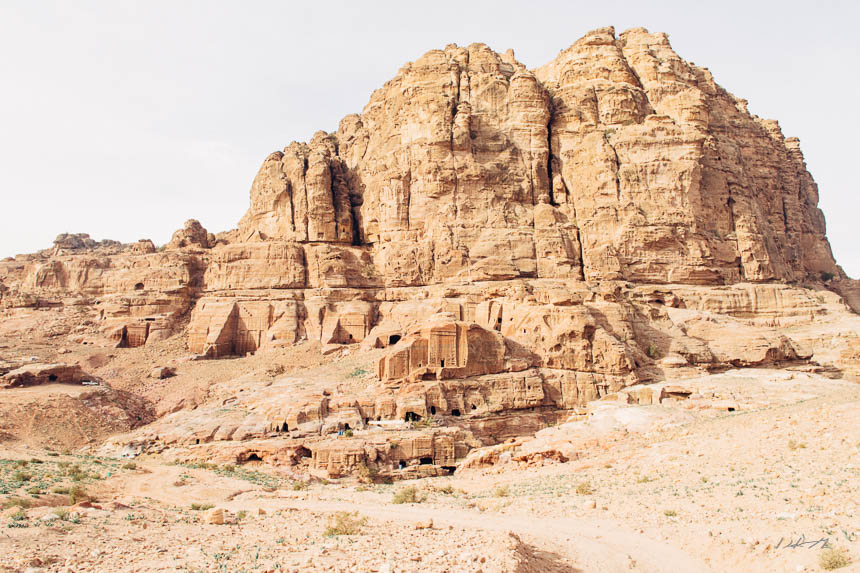 The first set of tombs on the way to Jabal Haroun.

The quest to the mosque

Arguably the most difficult part of this trail is the beginning. It forks frequently, crossing with trails that lead me to other parts of Petra. It bends a whole lot as well. Fortunately the compass on my phone works regardless of service coverage.

I know I'm on the right track when I spot a series of tombs set against a camel-shaped mountain (see photo above). It's on a map I remember studying that I need to pass these tombs on the way to the mosque.

The trail forks several more times and like the guides in Petra said, there are no signs or trail markers. There are no indications that I'm still headed in the right direction since the forked paths both move in approximately the same cardinal direction, maybe separated by just a few degrees on the compass.

The locals here are quite helpful though. They're the last of a few families who still live in the caves near Petra, the few who were adamant about staying when the 250 other families were relocated in the name of preservation. It's controversial move, since those other families never benefited from the tourism boom in Petra. At the same time, I can also see why it was necessary when I see tombs used as goat pens.

In any case, these locals see a few tourists make their way to Jebel Haroun every week and they're familiar with the ritual of pointing in its direction. They're also incredibly hospitable. Each local I meet invites me to tea. 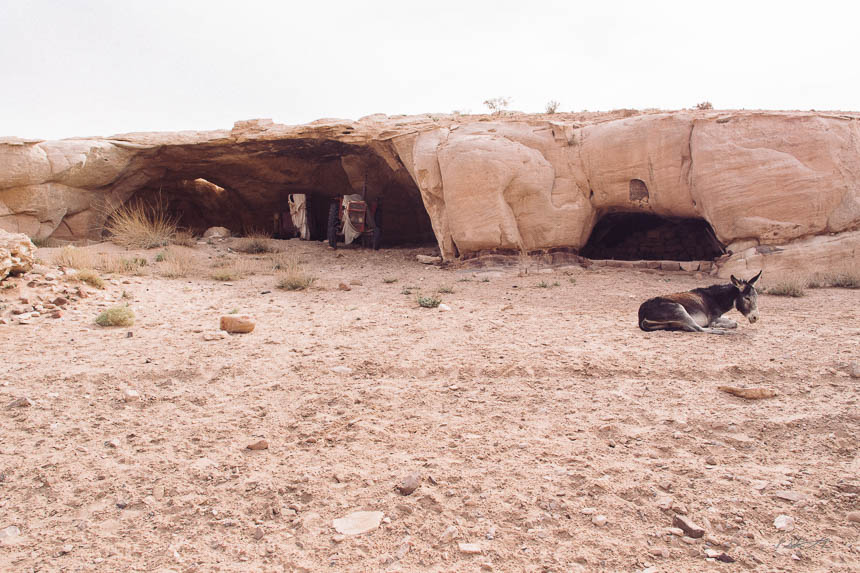 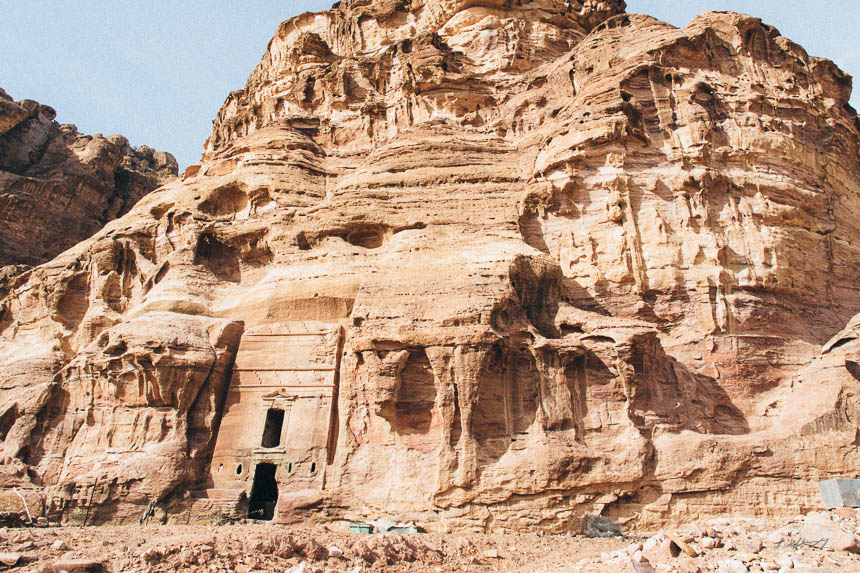 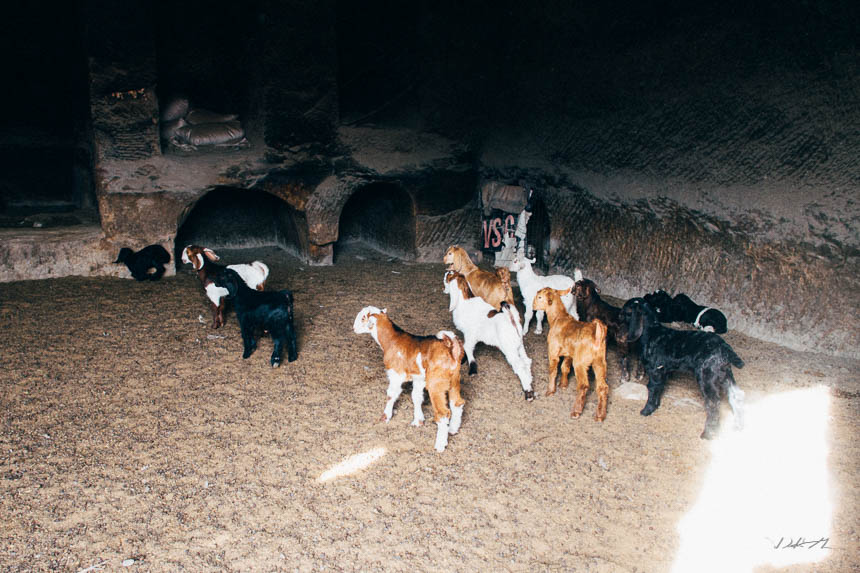 Have you ever played one of those adventure games where you have to do a jump through a bunch of hoops to complete a quest and reap its rewards? This trek might just be one of those quests.

After you've spoken to the guides at Petra for a briefing of the pilgrimage route, asked for directions and decline tea from countless residents along it, and caught a glimpse of the mosque (a fleck of white near the summit), you need to find a key.

Unlike most places of worship I've visited, this mosque is locked year-round and left unattended. Anyone wanting to see the sacred shrine and the mosque's interior needs a key carried by someone on the trail. There's no name, no description, for this someone. Perhaps the guardian of the key is a role that changes hands daily or maybe there are several copies of this key floating around. 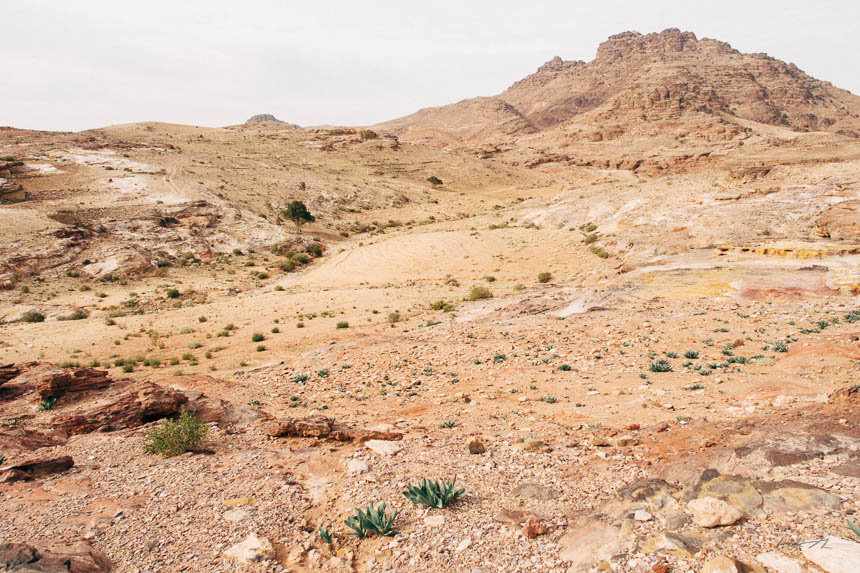 Where could the guardian of the key be?

In any case I make it my mission to find this key before I climb. I'm concerned that I might miss this person in passing and every one hundred paces or so I stop to spin around 360°, scanning for signs of human life. This place is desolate. There are no more cave dwellings, no more locals to speak to and ask for directions from.

In some ways, that might actually be a good thing. It's much easier to spot a person when people are a rarer sighting. Luckily for me, it's the guardian who ultimately finds me.

Today this person is a mother of seven children. She's with three of her youngest and on spotting me rushes out to meet me with kettle in hand. The key, she tells me, is with a small tour group who came by earlier. I can grab the key from their guide. With that she offers me some tea. I politely decline in the interest of time.

The next part of the trail is kind of confusing. Much of the path blends into the scree. I take a turn too soon at a fork leading towards the mountain. The guardian sees this and shouts across the gorge. Maybe it leads to another part of the mountain, but I'm not willing to find out and I backtrack on her instruction. When I'm finally on the right path she waves me off. From here until the mosque, I follow the rock towers that others have built, a trail of bread crumbs to the top. 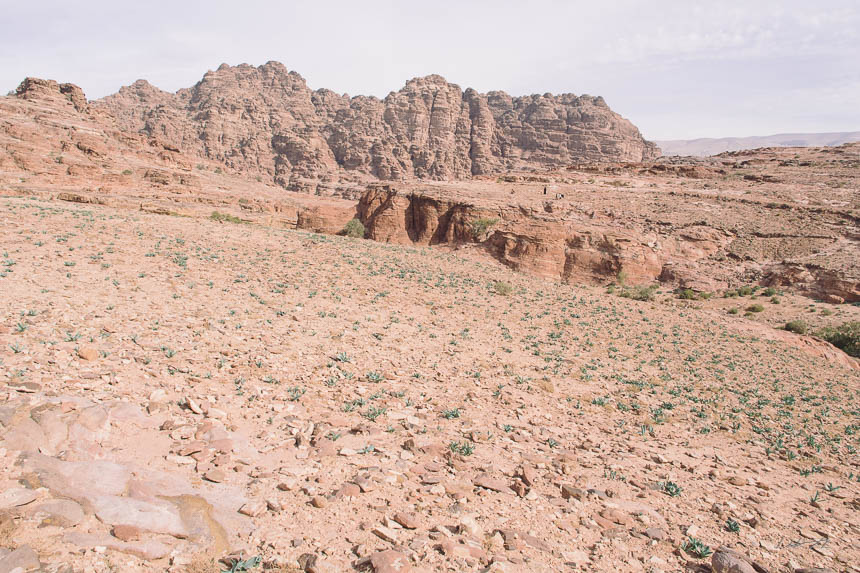 The guardian of the key, across the gorge. 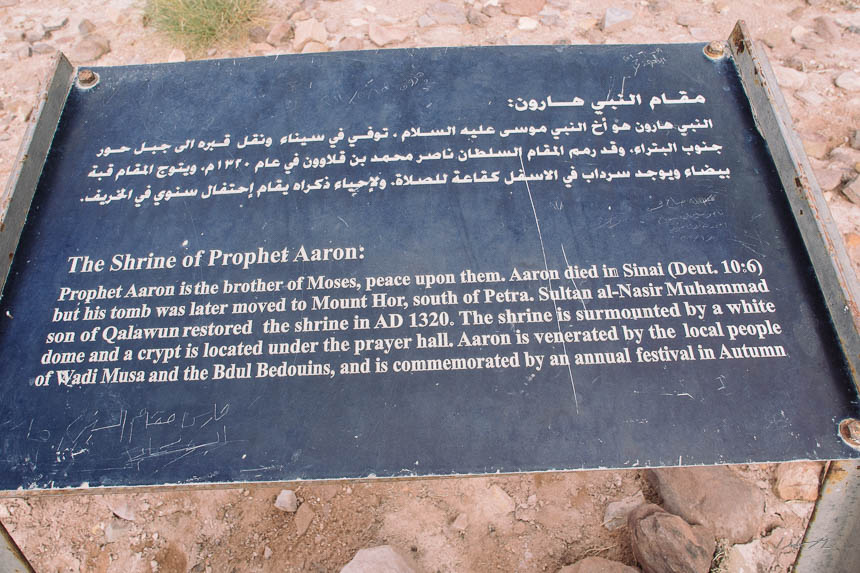 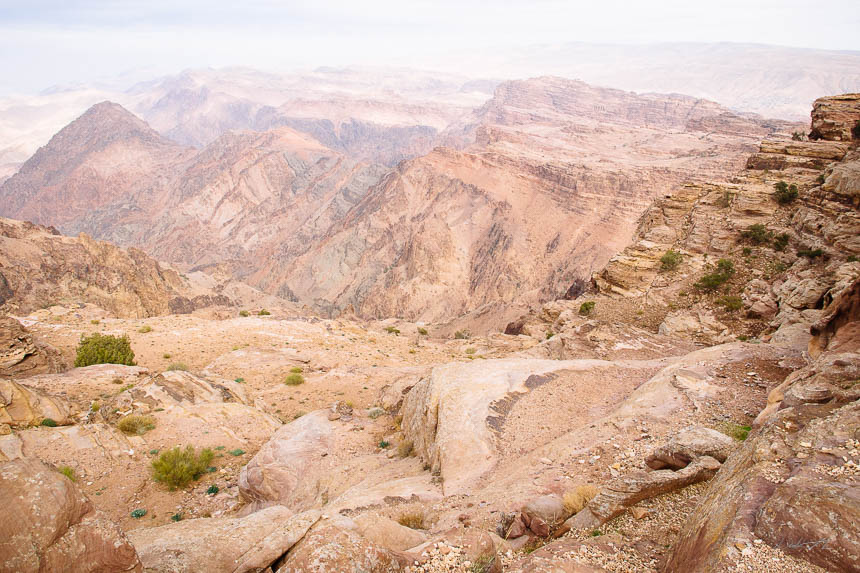 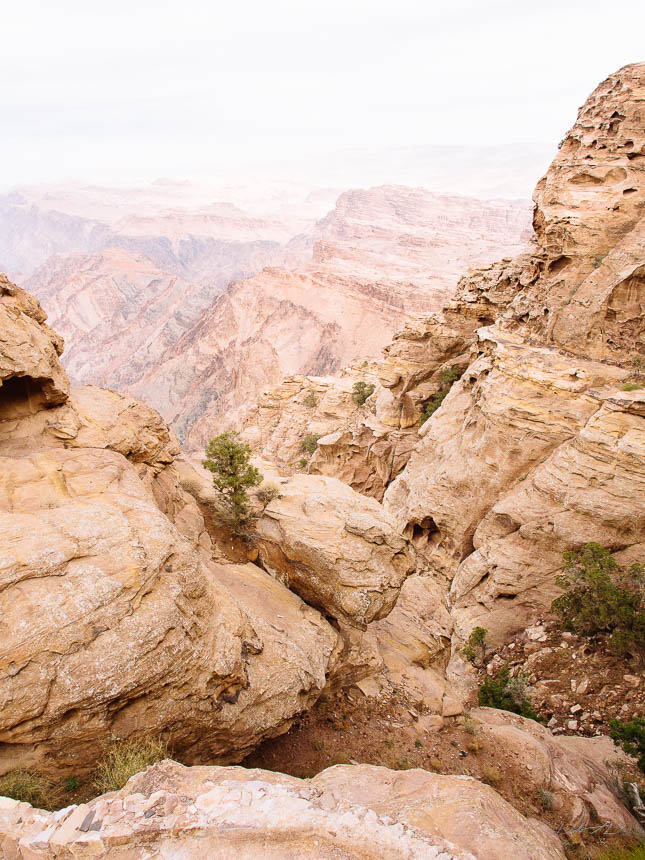 It's a moderately strenuous upward climb before I'm finally near the mosque. Indeed, there's no sign of any tomb here.

The guide passes me the key.

Modest is how I'd describe this mosque. Inside, there's a working clock, some lighting fixtures, and a few carpets used for prayer. The interior gives almost a homey vibe, like I've walked into someone's dining room and dinner's in the oven in another room.

The shrine itself is very simple in appearance and sits right by the doorway. I think I may have bypassed it completely were it not for the green cloth. 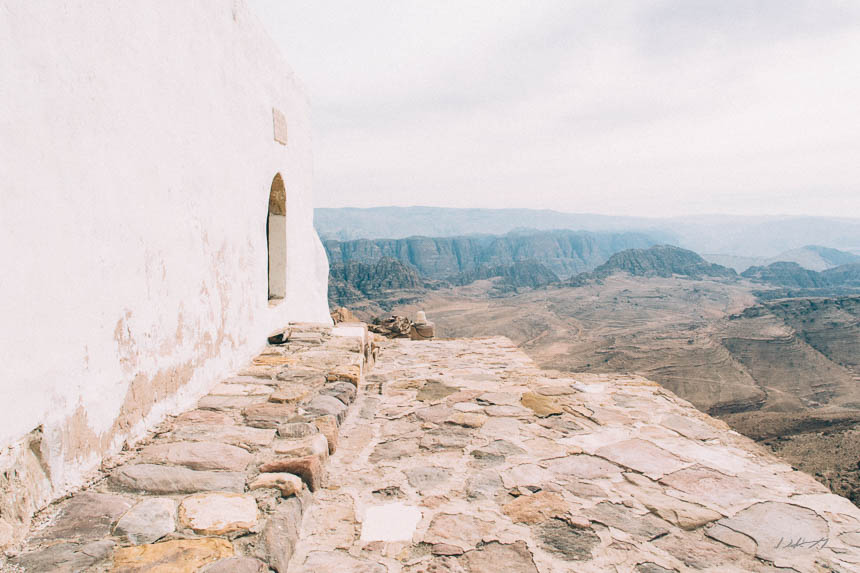 Entrance to the mosque. 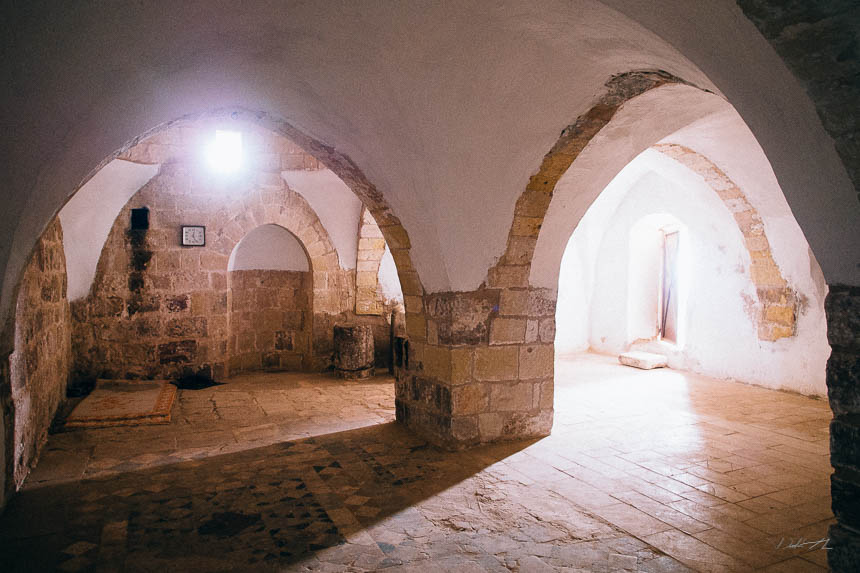 Inside the mosque. As expected, there are no signs of a tomb. 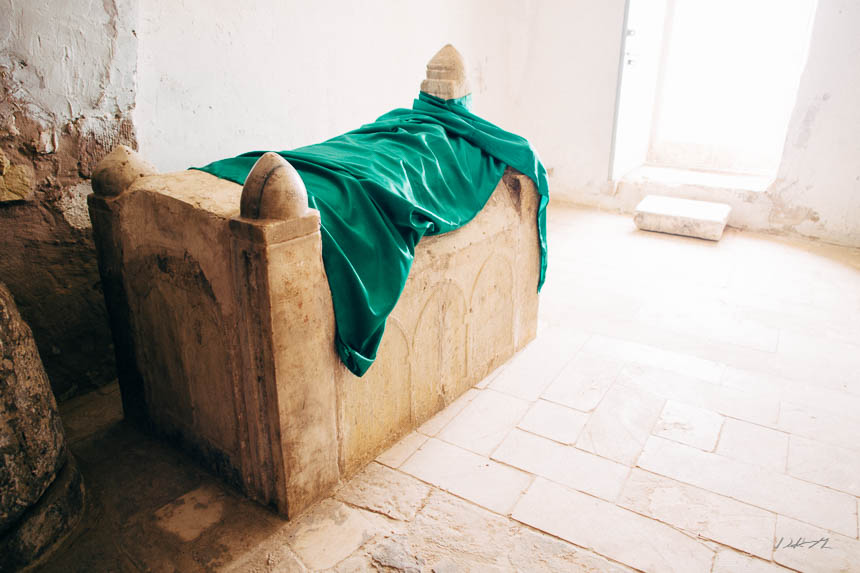 The shrine that Prophet Mohammed came to see, draped in a green cloth.

To the left of the entrance is a narrow stairwell that leads to the rooftop of the mosque. This is the highest point for quite a wide radius and the panoramic is impressive. I can even see a small bit of Petra, the Ad Deir monastery, and most of Wadi Musa, the modern city bordering Petra. 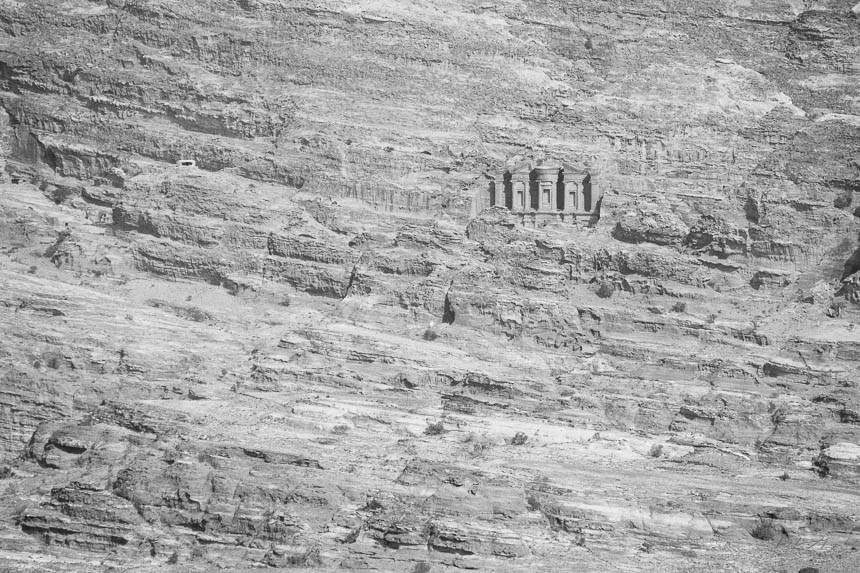 The top of Ad Deir, the monastery. 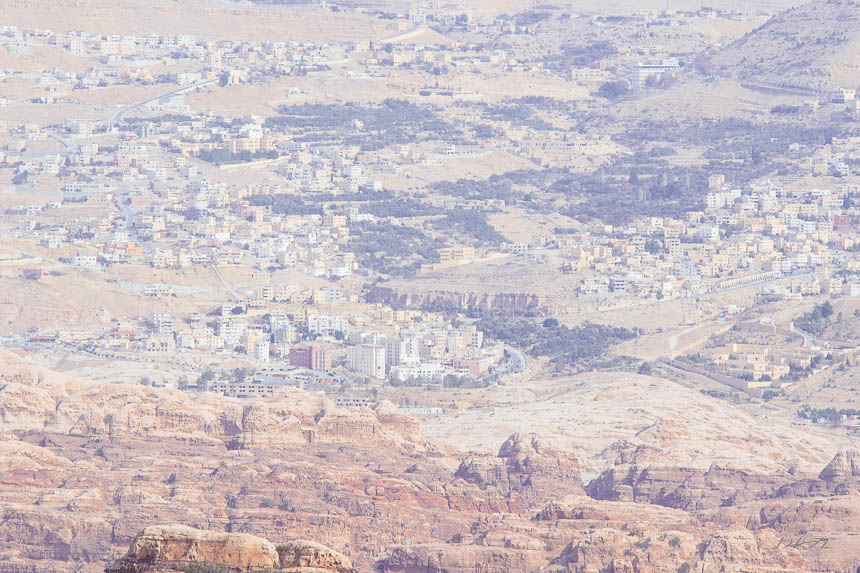 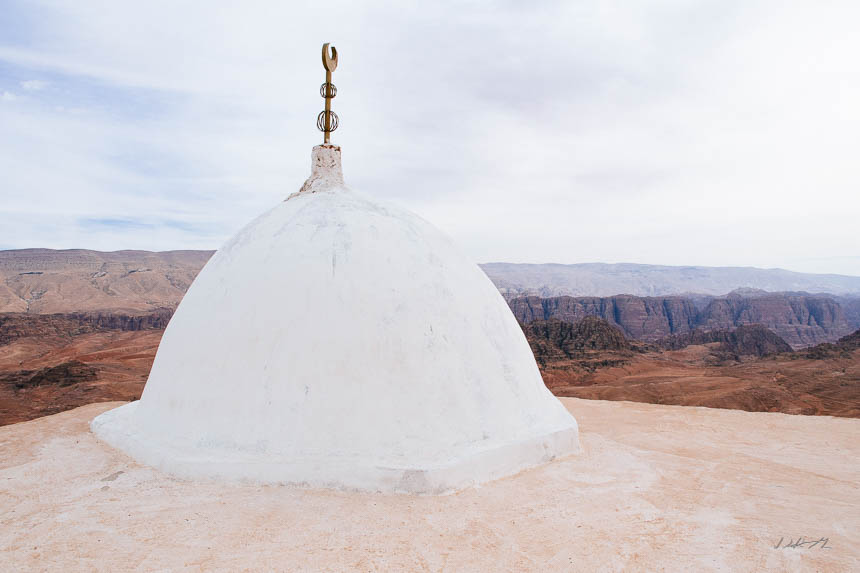 The dome of the mosque. 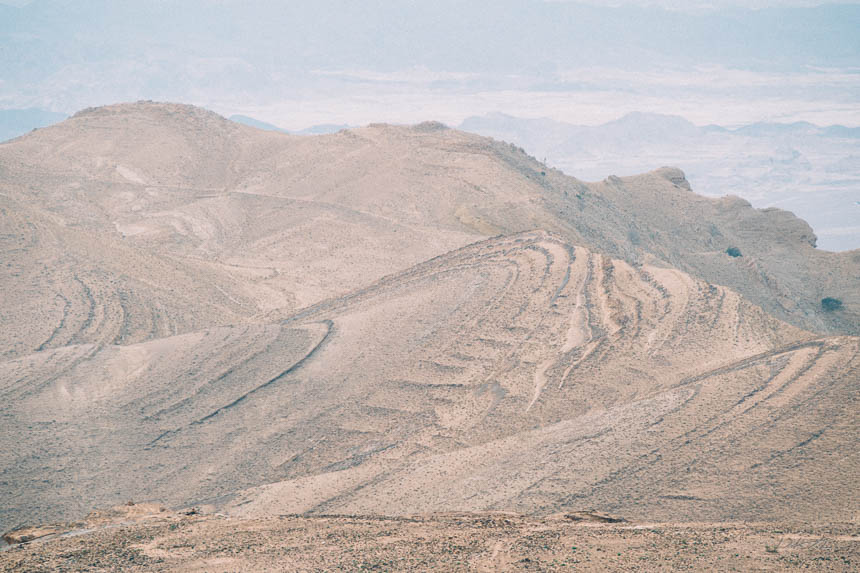 On my return, I drop my keys off with the guardian. She invites me for tea again. It looks like I'm making good time and I accept her invitation. The tea's really sweet. 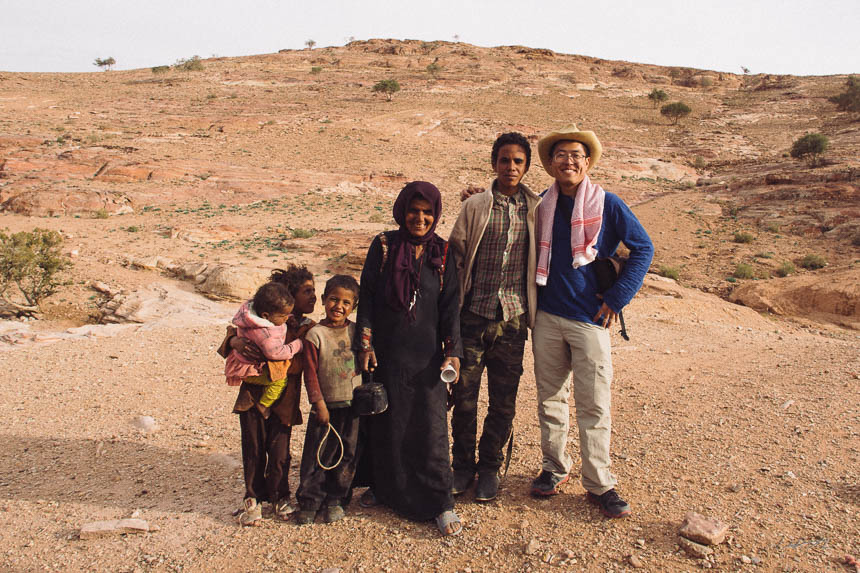 The guardian, holding the tea kettle.

Late afternoon I hear an orchestra of cowbells nearing, a sound familiar to me from my encounter with the Bedouin shepherds on the drive between Amman and Petra. It's a large troupe of goats. I snap a few pictures of them, signalling to the herd that I'm their shepherd, apprently. For 15 minutes they follow me before breaking off on their own path home. 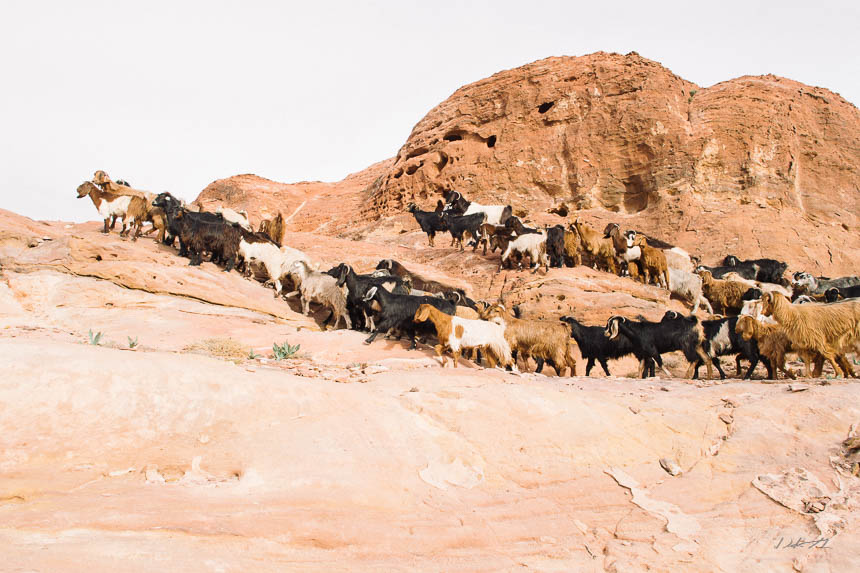 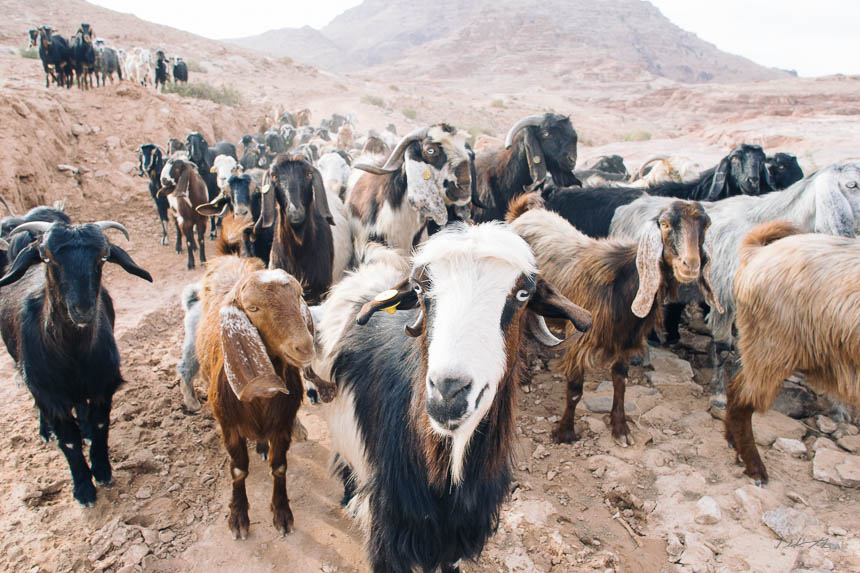 Leader of the pack.

Nearer Petra, I hear a more disturbing sound, the chorus of slaughter echoing through the valley, part of a nightly ritual as families prepare their supper partly given to them by the goats that I've seen. The cries are unsettling and I hasten my pace to leave them behind. 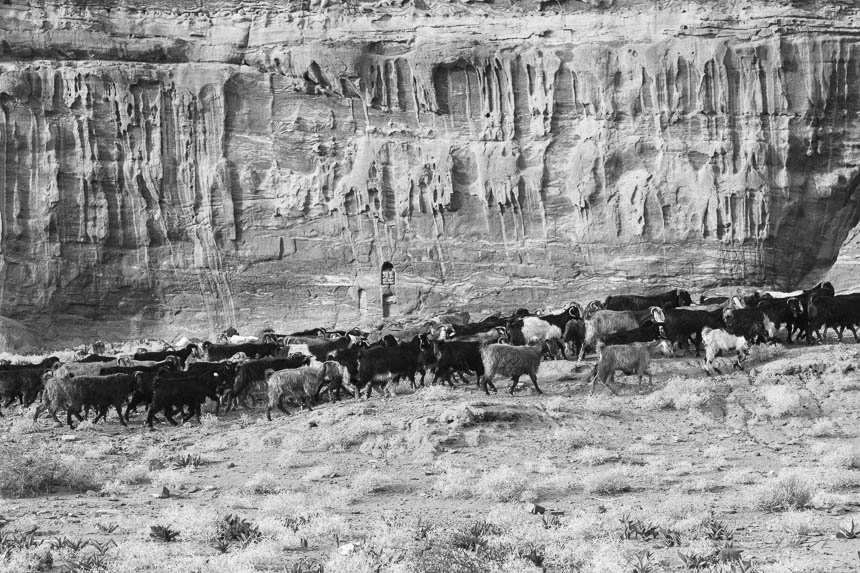 I make it back to the colonnaded streets of Petra by 5PM—one of those rare moments for me where it's not pitch dark outside when I return from a day trek. I pat myself on the back and walk home, my legs absolutely dead from the 45,000 steps my pedometer says I've taken. 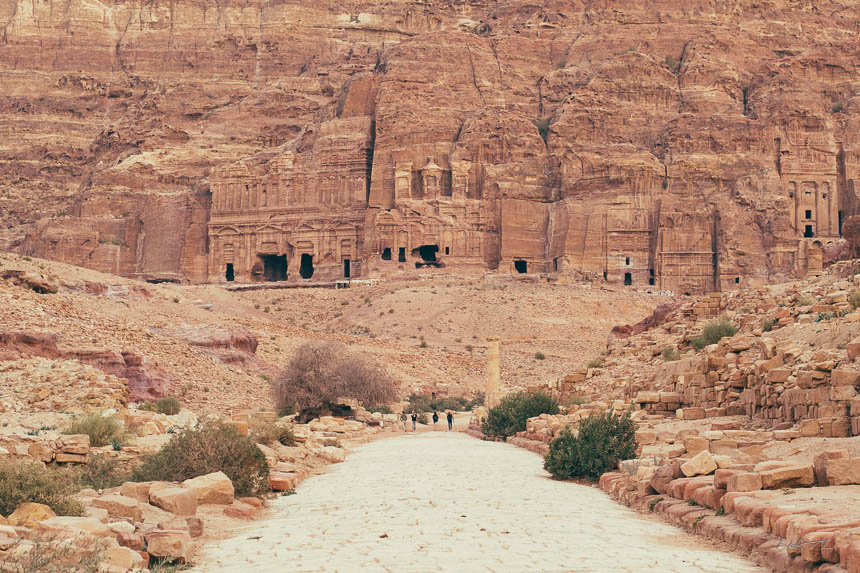 The Four Royal Tombs and the colonnaded street.

0%
The Mosque at Jebel Haroun read 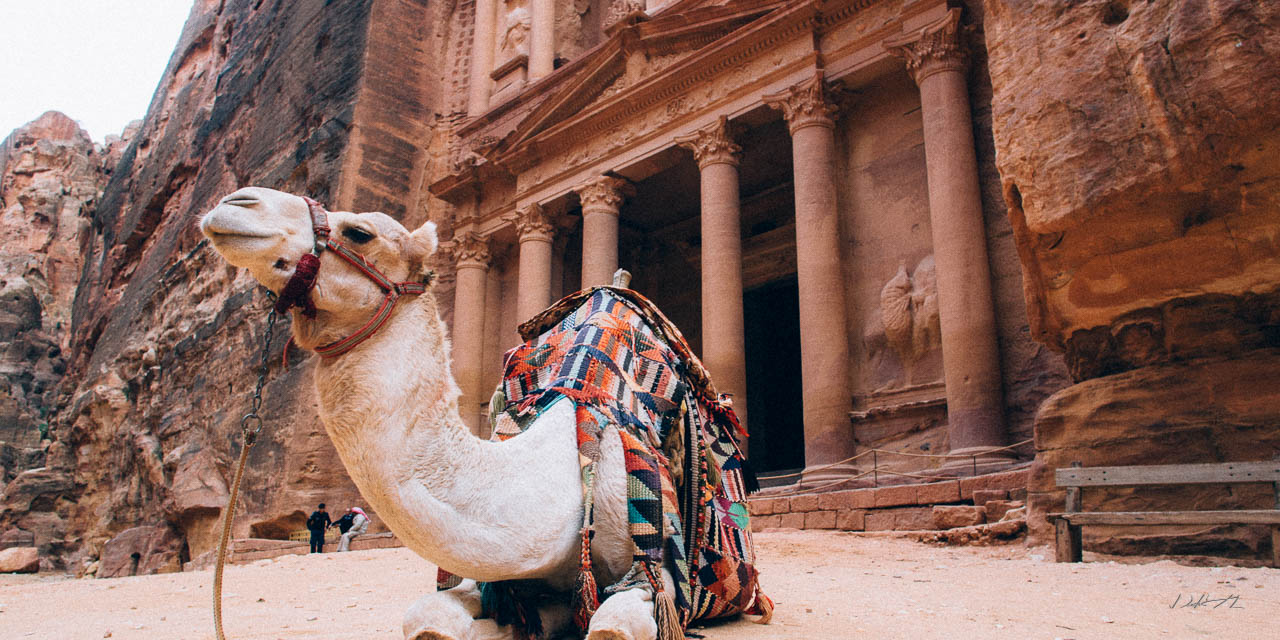 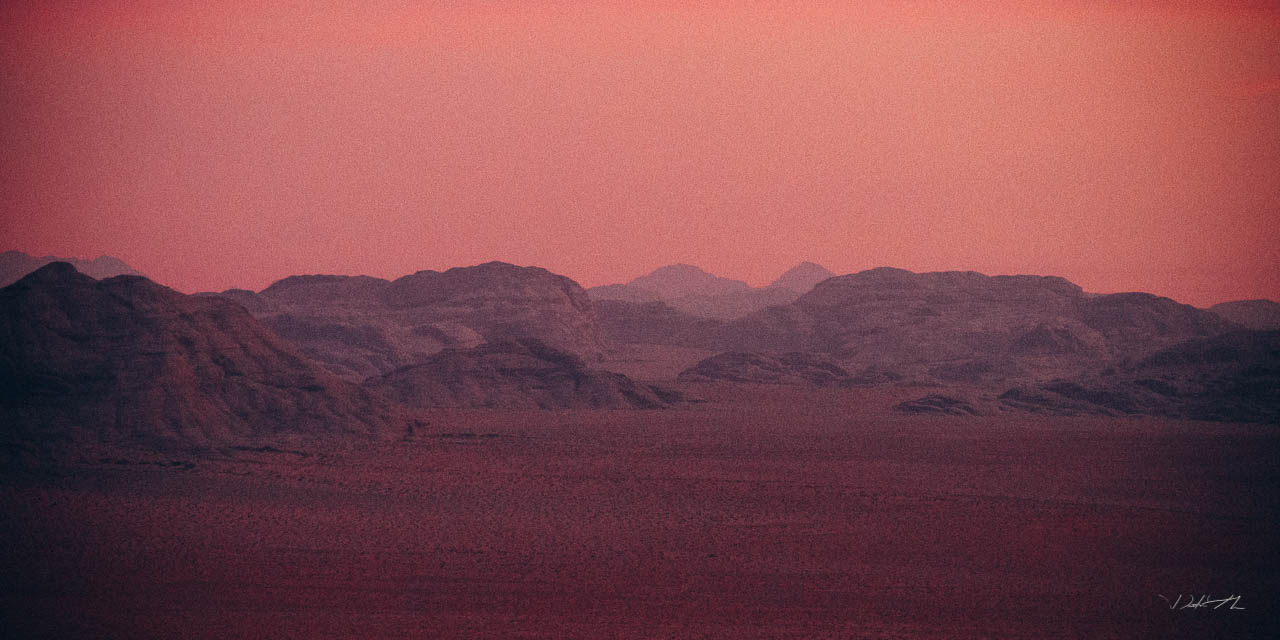