From a descending plane, Hong Kong looks like a glimmering gem sitting on blue velvet.

Gleaming skyscrapers reach as tall as the mountains behind them. The urban sprawl extends as far as the eye can see. Lights on the harbor indicate junks and barges but hang off the city like little ornaments. 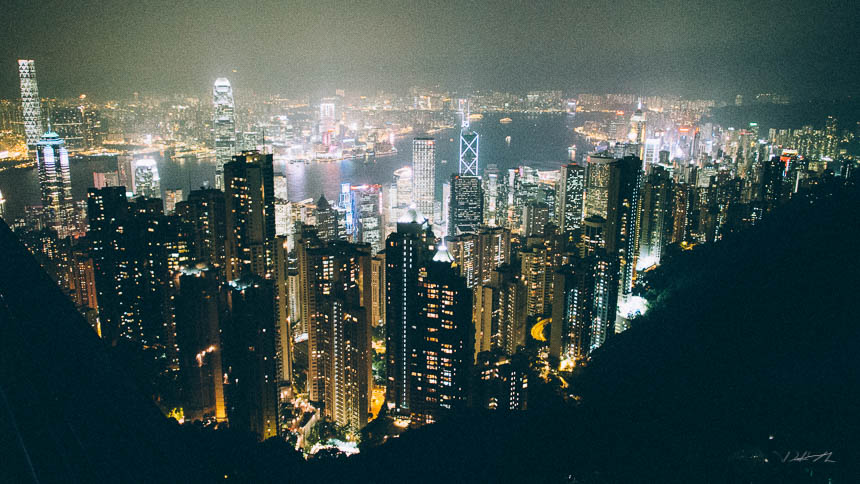 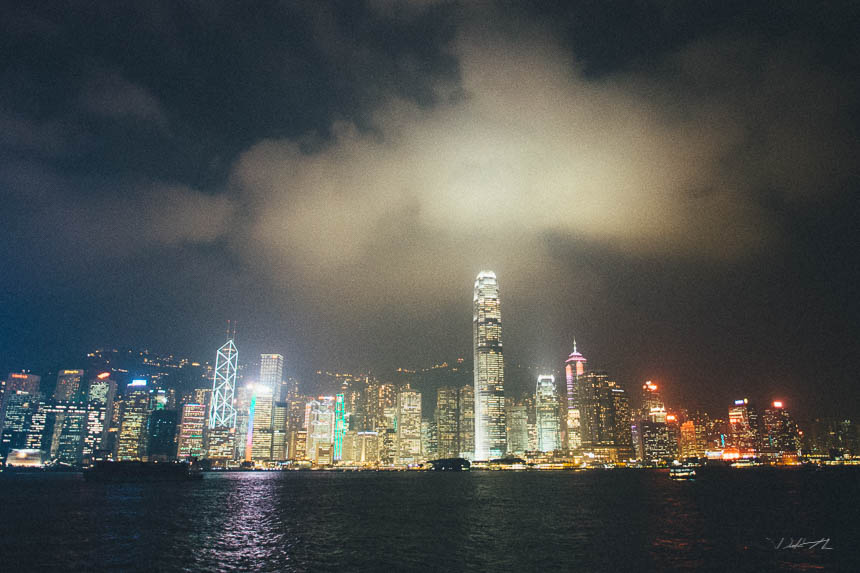 I step foot outside the modern terminal building and realize only a small part of it is the glossy metropolis I see from the plane. This is, in fact, the Hong Kong I knew as a kid, the one from Hong Kong cinema circa the 80s and 90s.

The first thing I see are rows of taxis waiting for passengers. They seem unchanged with their coats of red paint and green half-moon medallions. 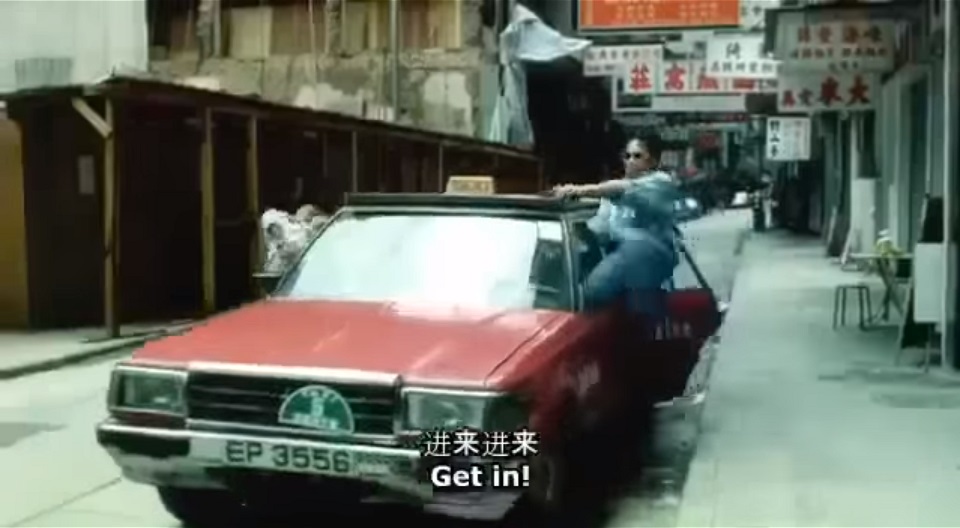 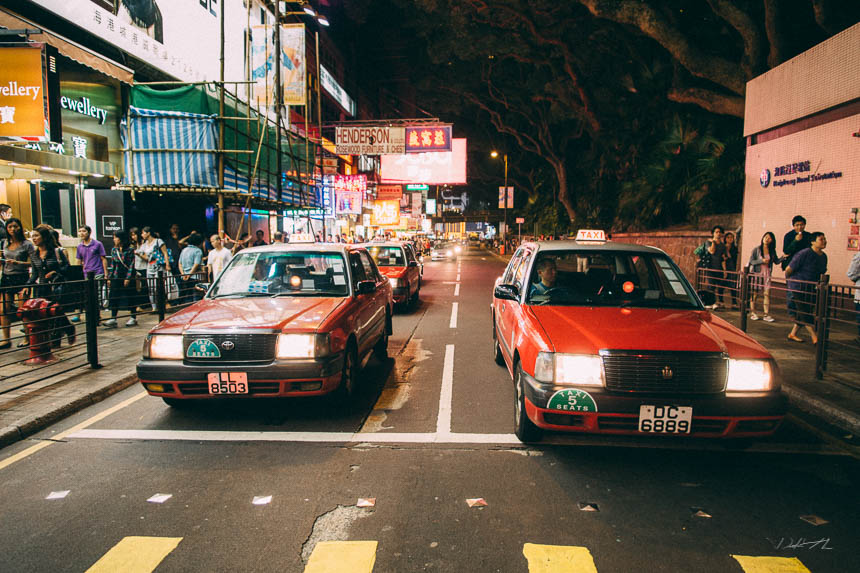 I take one of these taxis to Causeway Bay. Cantopop plays on the radio. Over the highway guardrails I glimpse roads and alleyways in Kowloon. Neon signs jut from the sides of buildings in thickets. Again, just as I remember them from the movies. 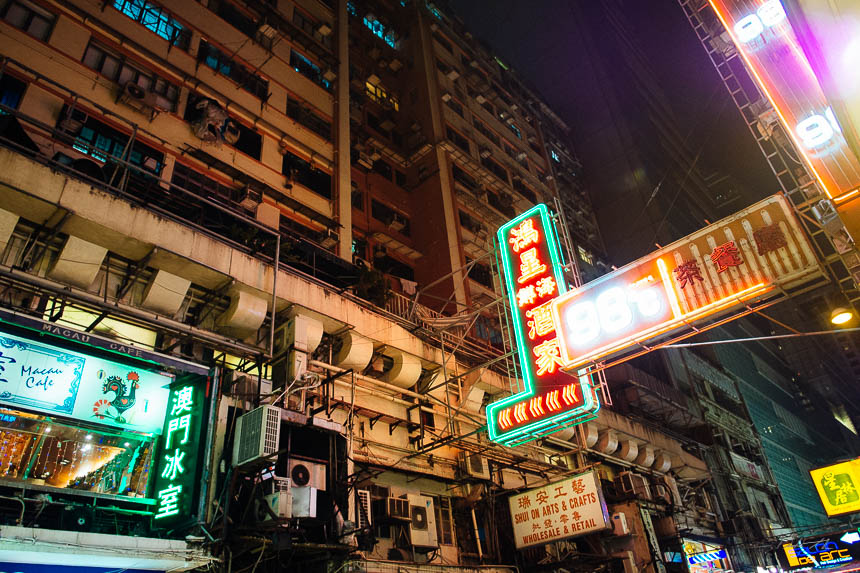 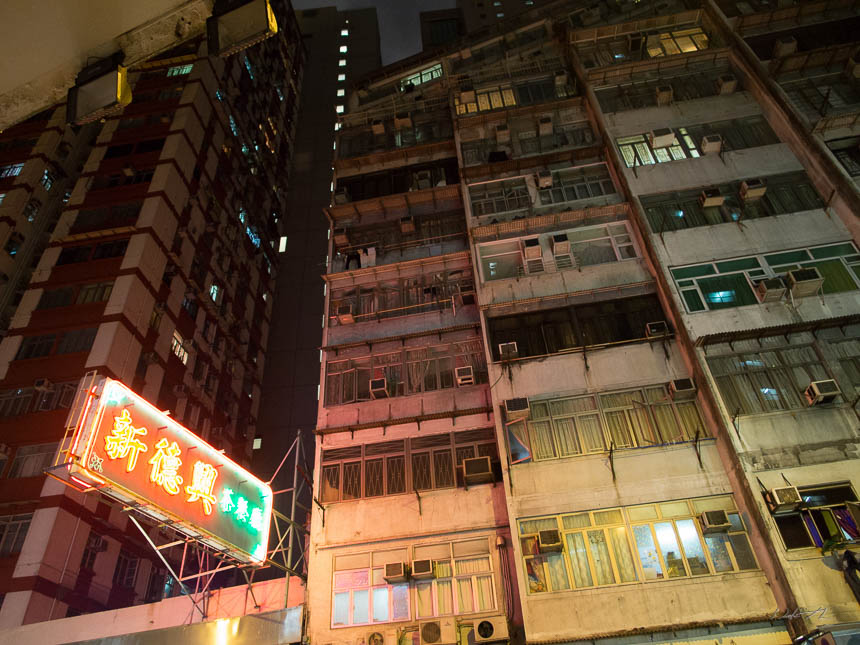 I'm usually averse to big crowds, but I feel right at home in them in Hong Kong's markets. This is where newcomers go to experience a barrage of new sights, sounds, and smells they've never encountered. It's a lot to process all at once, so I sit along the edge to snap a few photographs before diving in myself.

You can see more of the markets in this post. 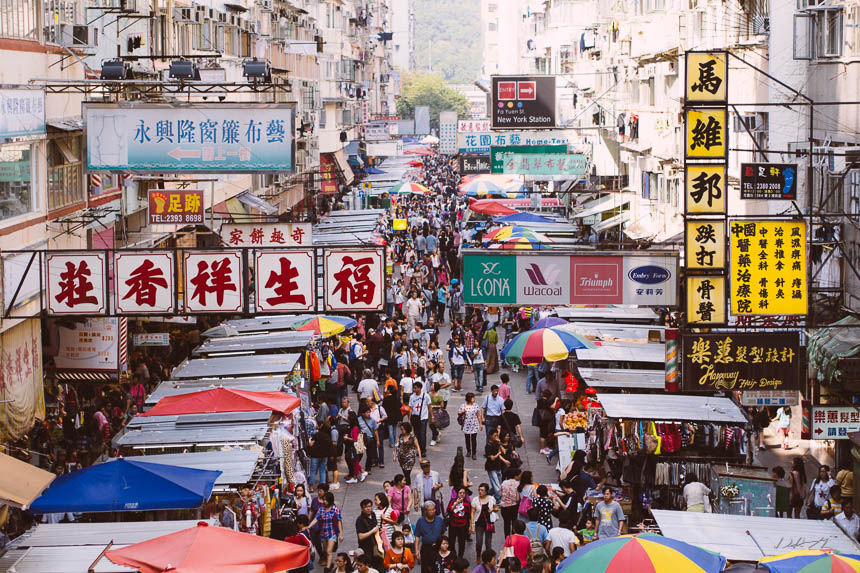 Market in Mong Kok. How many signs can you count? 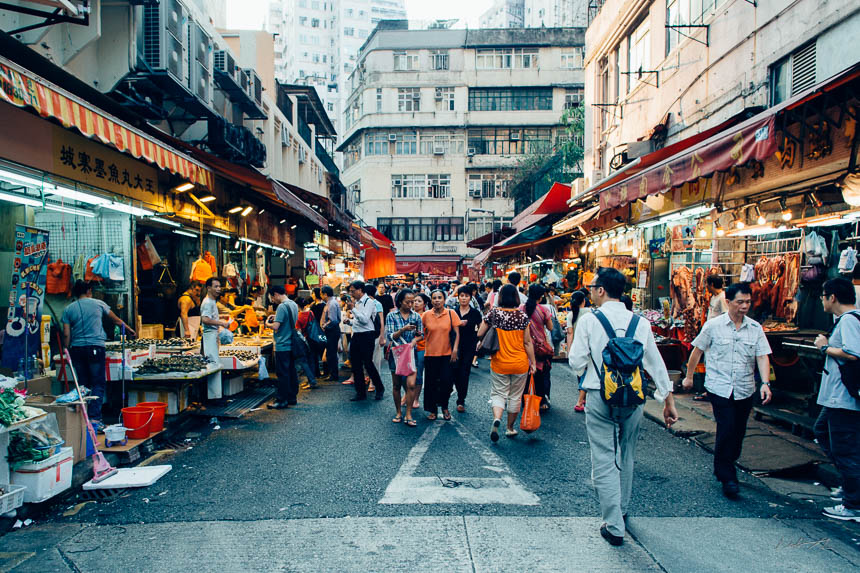 One of Hong Kong's defining features are its monolithic buildings. If the crowds don't suggest how densely populated this place is, the buildings will.

I tailgate into a few apartment high-rises just to get a sense of what it's like to live here. Narrow hallways connect compact living spaces. Some households leave their doors open with the screen shut, revealing the furnishings they contain. Clothes dry on poles hanging out the window and, if those aren't enough, on lines nailed to the hallway walls.

From the outside, these spaces are simple squares and rectangles. Windows and A/C units and balconies draw perpendicular angles. These exteriors might be characterless if it weren't for the grime and dust that have accumulated over the years. They give these buildings a sense that they've been worn in by generations of tenants who have come and gone. 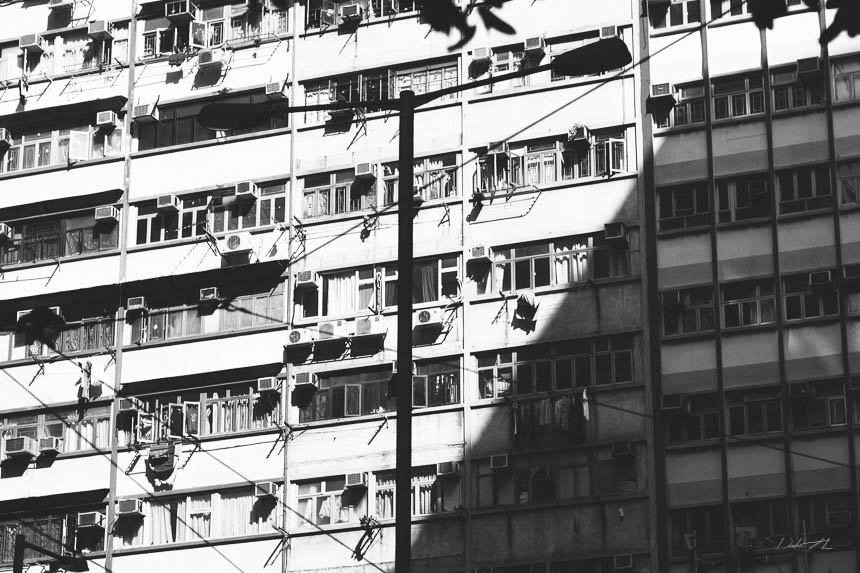 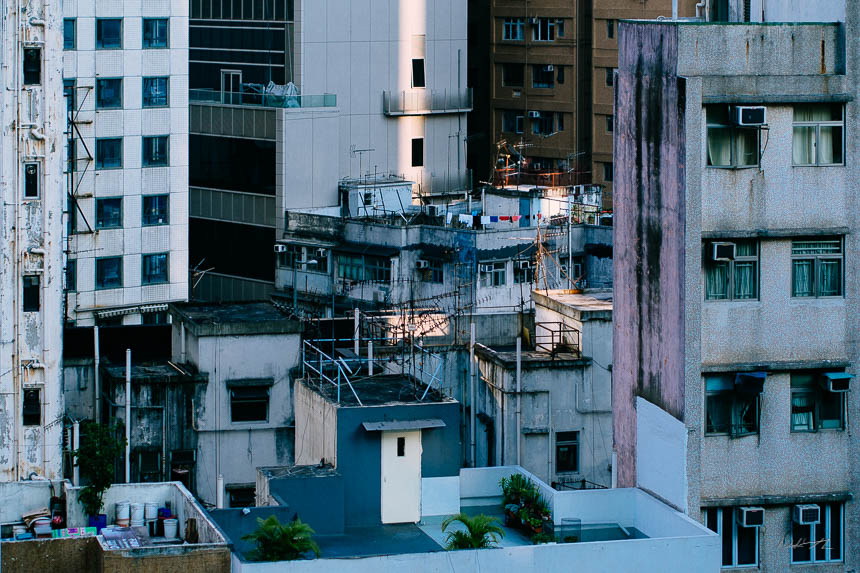 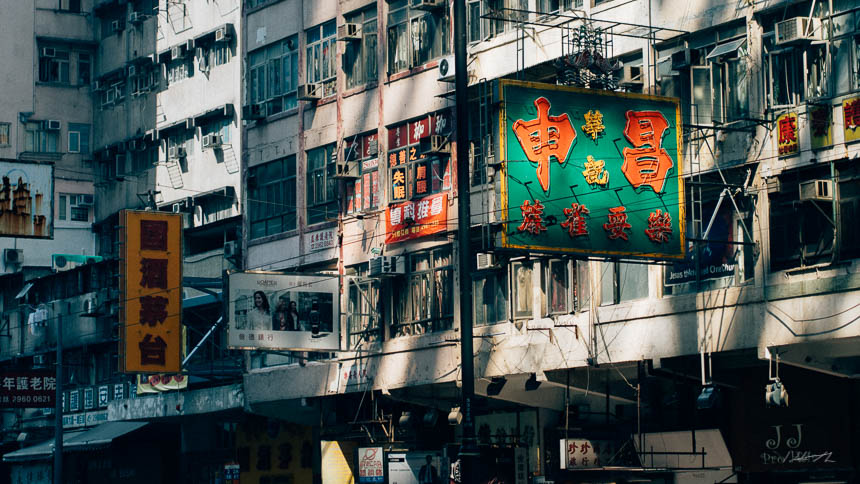 A place that no longer exists

In exploring these buildings I imagine myself walking through the claustrophobic alleyways and dingy corridors of Kowloon Walled City. I feel a certain nostalgia, wistfulness, for this place I've never been to.

This was a place largely absent of law enforcement, riddled with crime, drug use, prostitution, and the seediest of characters. But there were normal people living here as well and this was as much of a community as any other. If it were still around and unchanged from how it was in the 80s, I might have booked a month long Airbnb here for the photos.

But alas, Kowloon Walled City is no more, having been torn down in the early 90s with its 55,000 residents evicted. But pictures of it, especially Greg Girard's fantastic photographs, inspire my imagination. 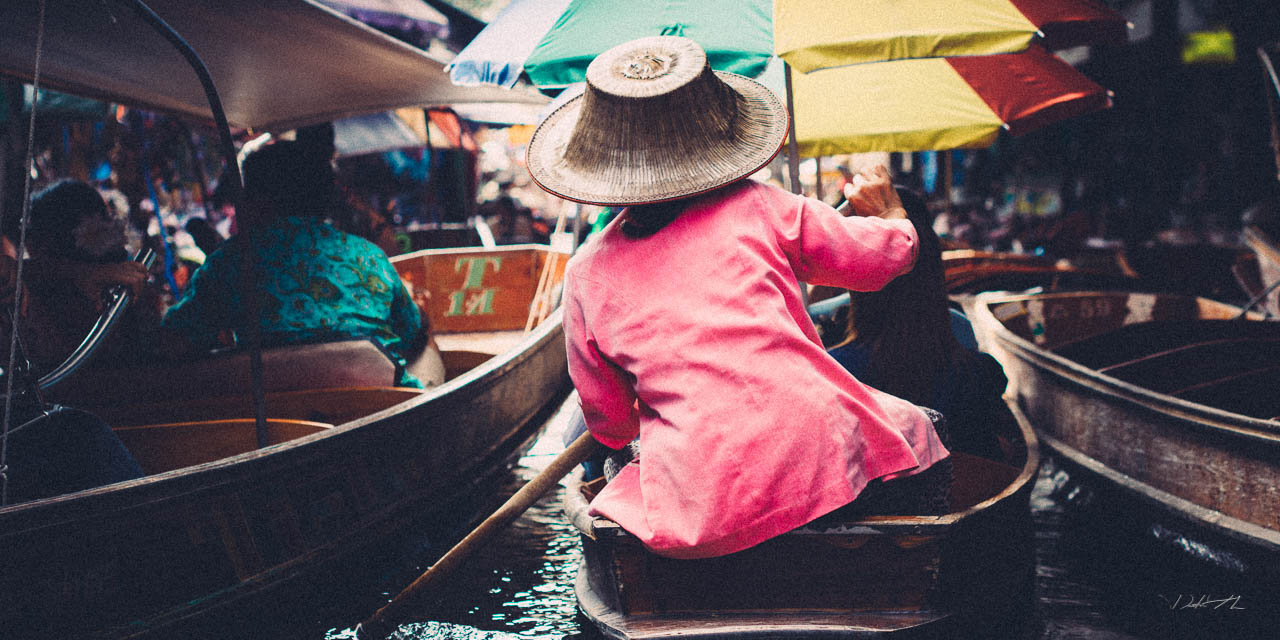